Our Last Week in Annapolis

This is the pre-post to us “taking the lines” as shared in the last post. But it’s worth going back in time for a few minutes . . .

I will try to do the very summary version of that week because it is very easy to get behind the times on these posts!!

We had stayed in Oxford for several wonderful days and thought we might stay for a couple more. Then we woke up the next morning, realized we had a new “neighbor” anchored beside us who decided to run the generator day and night. You know one of the coolest things about living on a boat? If you don’t like your neighbors, you can just move instantly! So we said goodbye to Oxford and headed to less civilization and more wilderness in Dunn Cove. It was a cold, drizzly day. As Frank likes to say, “You’ll have that.” Days like that are not a bad thing from time to time . . . so we made the most of it.

The captain relaxed while the first mate motored us to Dunn Cove. 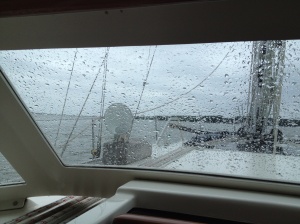 The rainy view through the dodger. 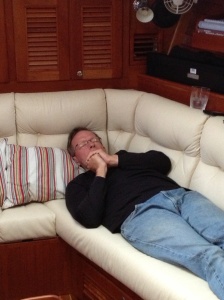 And what’s the best thing to do on a rainy, chilly day? NAP! He looks like he’s praying, but what is he praying for?

The next day we returned to Annapolis via Knapps Narrows, complete with draw bridge and very shallow water . . . always makes for an interesting voyage. We’ve been there several times before, so knew what to expect.

Going through the Knapps Narrows Bridge. After passing under the bridge, we passed this guy. Yup – he had run aground. He was free just a minute later, so all was well.

We had a memorable week in and around Annapolis before we left and had some great visits with good friends. Frank’s friend Jimmy (and now my friend) hopped on Eleanor Q with us for a couple of days.  The three of us made lots of good memories in a little bit of time. Night one ended up in Galesville on the West River just south of Annapolis where we were joined by Anthony, half of a couple (Annette being the other half) that we met last September at a gathering of boaters sponsored by the Seven Seas Cruising Association.  We will be seeing lots of them next fall and winter aboard their sailboat, Magnolia, (which currently lives in a marina in Galesville) since they have now (very recently!) retired and will be sailing south this fall on much the same route as ours. Jimmy, Anthony, Frank and I had a fun evening together after we managed to twist Anthony’s arm to stay for dinner. Because Anthony felt bad about staying without having food to contribute, he did something much more valuable for us: he offered to take all of our trash and recycling off of the boat. You have to understand, that stuff accumulates FAST when you don’t go on land every day and that is a great and thoughtful gift!

We spent the next night with Jimmy on a mooring ball in Annapolis Harbor watching the Wednesday night races. Wednesday night races are made up of a variety of amateur sailboats of various sizes. The finish line is at the end of the harbor. The mooring field is fair game. If you don’t know what a mooring field is, it is a bunch of big floating balls that are anchored to the  floor of the body of water. A boat can just pull up to the mooring ball, gracefully (ha!) snag the rope attached to the top of the mooring ball with a long-handled boat hook and attach it to one of the cleats on your boat. It is easier than anchoring and generally more secure.  There is usually a reasonable fee to secure a mooring ball for the night. But back to the races: so these sailboats (remember, they don’t maneuver quite as precisely as a power boat) come FLYING THROUGH the mooring field racing to the finish line! There are lots of near misses to excite the crowd and it is really cool to watch! Below are some shots of the races and our travels with Jimmy. We ended the evening with the three of us having a jam session in the cockpit, Jimmy and Frank on guitars and Ems attempting to sing. At one point we had a 12 bar blues riff going and improvised our own tune called “The Annapolis Harbor Blues” (which is an oxymoron). There may have been rum involved, but I know for a fact there were Raisenettes. 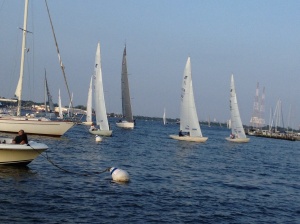 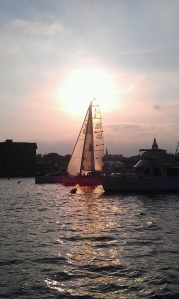 Jimmy caught this beautiful shot during the races.

The next couple of days were spent back in our slip in Annapolis cleaning the boat and prepping to leave Annapolis for the final time. We have dear friends in Annapolis, Tom and Cathy, who used to be in the slip next to us when we first got Eleanor Q. They, too, are preparing to start cruising this fall and we spent lots of time together plotting and dreaming and sharing “stuff” and information and meals. They made the gracious offer of the use of their washer and dryer at their house during our last week, and I was happy to take them up on it! Hand washing light weight things has been no problem, but there is a point when your sheets, towels and blue jeans begin an eco-system of their own and need some love. A common question after a couple of weeks is, “Am I losing weight or do I just need to wash these jeans?” It’s generally the latter.

Since Annapolis is one of our favorite places, we figured we should enjoy our last couple of days there. Saturday included a brisk walk into town for people watching (commencement week at the Naval Academy brings out lots of families and lots of young people in uniform – always an impressive sight) lunch and a stop at Frank’s second favorite ice cream place. (Well, third. Dairy Queen is always first, Oxford second, Annapolis third).

Ego Alley in Annapolis and Ice Cream. Does it get much better?

Sunday was a very cool “final day” for us. We had been wanting to attend services at the Naval Academy Chapel for three years. Okay, let me clarify, because I know what some of you are thinking who know us both. You’re thinking, “Who’s WE? Mary Marie wanted to attend services and Frank agreed in order to be a good sport.” I’ll have you know, that is not the case. Frank was the one who suggested it from the beginning and I always have an interest in visiting a new church so was very happy to go. So if you were one of the ones who thought it was purely me driving this outing, take it back! But to be clearer yet, when I was looking up the service schedule, I asked, “Do you want to go to the Catholic service or the Protestant Service?” and he replied with, “Oh, I don’t care. I just want to see the building.” And that’s the rest of the story. It was a great service, lots of families with their new graduates, a GREAT speaker and wonderful music. (We can’t help it . . . we critiqued the pastor’s public speaking skills. You just can’t get away from some things.) A beautiful setting, indeed. 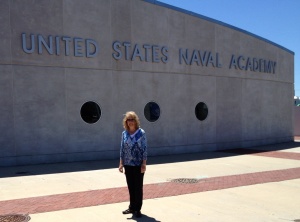 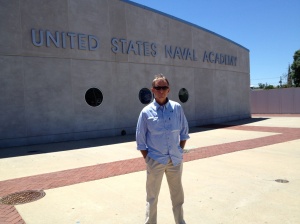 So handsome in his “Sunday going to meeting”clothes! 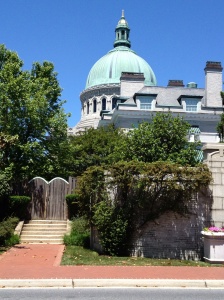 View of the Chapel Dome

Front of the Chapel complete with anchor 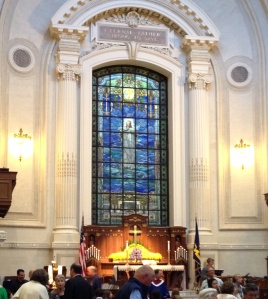 Beautiful sanctuary. The words over the stained glass window are the opening line to the Navy Hymn . . . 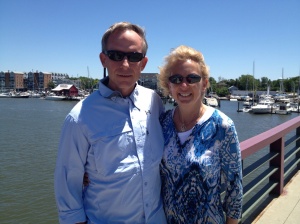 Crossing the bridge from Annapolis to Eastport. See you later, Annapolis!

Later on that evening, our friends Bill and Julie from Havre de Grace came to take a little sail and then have dinner on the boat. Then a surprise call from our friends, Greg and Cori, who were passing through the area and came and joined us as well! It was nice to share that last evening in our slip with good friends, food and laughter.

Julie and Bill on board!

By 10:00pm we tried to go to sleep, but I think we were like two little kids on Christmas Eve night. There was a commercial on television not long ago for Disney- maybe you’ve seen it: The family with two children are preparing to leave for their trip to Disney the next day and the kids won’t settle down and go to sleep. The parents keep saying, “But you’ve got to go to sleep!” And they would respond with a slightly whiny, “But we’re too excited to sleep!” Finally after things were quiet, the parents were laying in bed. The wife said, “Are you asleep?” and the dad quietly whined, “I’m too excited to sleep!” We can relate.

Read more from General Posts About Travels
← “Taking the Lines With Us . . . “
A Change of Bays: The Chesapeake to the Delaware →
7 Comments Post a comment