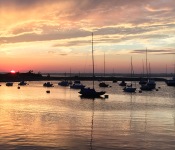 We’ve made some really good friends along the way while cruising and a couple of them happen to be from Connecticut, so we were thrilled at the change to reconnect with our friends from Cutting Class and spend a little quality time around their neck of the woods. When we pulled into the anchorage in Stonington, Dan and Marcia were there to greet us as we pulled up to the dinghy dock, scooped us up and took us to their home in nearby Mystic for catching up, laundry and a yummy dinner. Apparently we have “reciprocal privileges” at their house! Stonington is a lovely area and we took a little walk around town after dinner before returning to Eleanor Q. 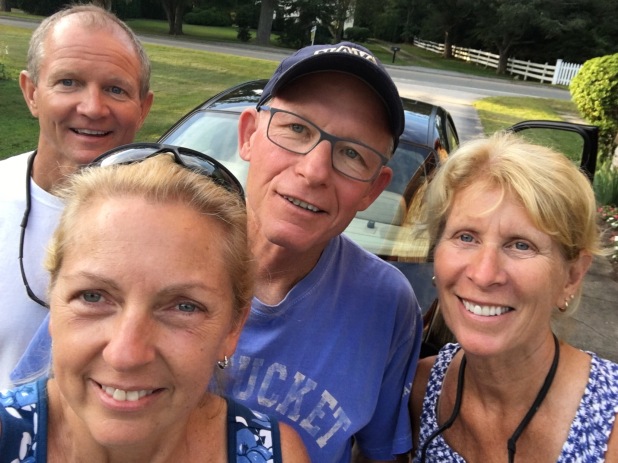 Reunited and it feels so good… 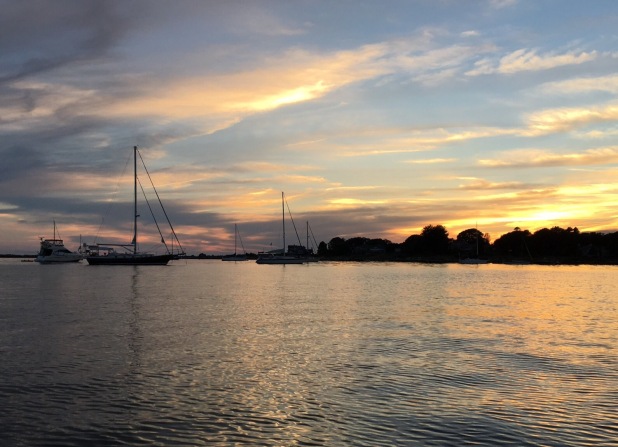 Eleanor Q in the anchorage

Checking the anchor and a glimpse around before bedtime 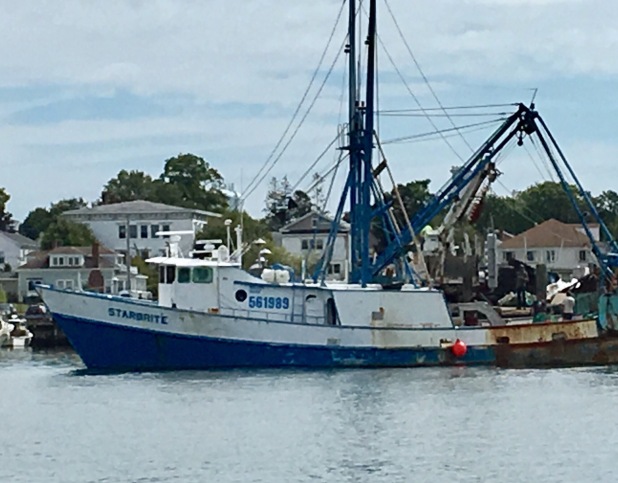 Frank saw this fishing boat and got very excited – apparently an Old Cape May girl! 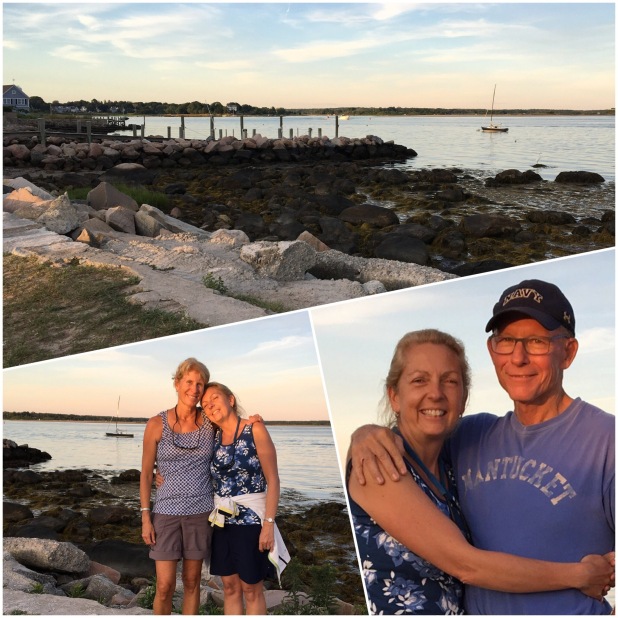 We said our goodbyes and got back on the boat thinking we would head to Newport the next day… but we have been in this area before and not spent much time. What was the big hurry? So in the morning, we changed our plans and decided to head right around the corner to Watch Hill and see what it was all about. Hey, if Taylor Swift bought a house there, then it had to be okay, right? Maybe we’d stop in and say hi to her during our stay. We mosied the 3 miles up a very winding and skinny inlet to Watch Hill. Although it was only three miles, somewhere in that short route we had crossed into Rhode Island. It took us half of the afternoon to figure that out… it was when I saw a t-shirt in a shop that said “Watch Hill, Rhode Island.” Duh. I said, “So, we crossed into Rhode Island today?” Frank said, “Guess so!” You know, Garmin Blue Charts doesn’t really show state lines!

Side note: one of the things that really does change as you go north…  VHF radio etiquette. It starts in NJ – that’s where we heard the first F-bomb dropped at a fellow boater. It got progressively worse in NY and in CT – and approaching RI, it’s really a doozie. We heard an unbelievable exchange of name calling between a couple of captains – all on VHF 16, the emergency and hailing channel. Someone finally broke in and said, “There is no civility in New England any more.” The Coast Guard kept coming on reminding folks that it is a hailing and emergency channel only… but they don’t know who’s on the radio or where they are, so nothing they can do to enforce that – even the guy that called another guy a “homo.” No lie. And even FRANK commented on it… and he worked in the fishing and casino businesses in NJ, so that’s coming from him, if you know what I mean. Some of it you have to laugh at, but really people, JUST CHILL! People squawk at each other a bit in other locales, but not quite so, uhm, colorfully as this section of New England. Okay, side note done.

Anyway, back to Watch Hill. It was an interesting place to visit… a busy, upscale shore town – but very scenic and a nice stopover for a night. 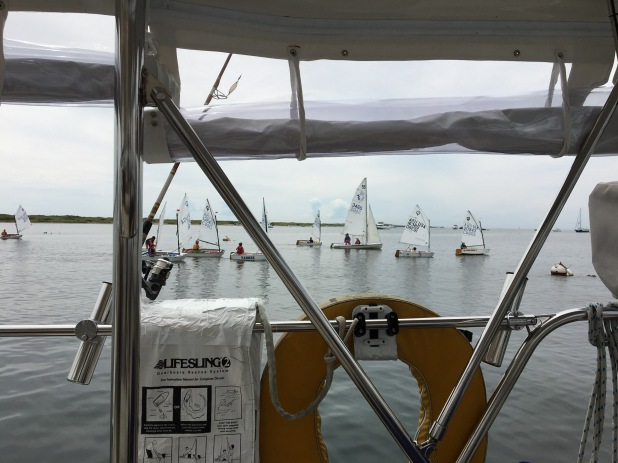 Parked in the outer harbor of Watch Hill. No matter what harbor we pull into, one thing is universal… kids sailing classes!

Oh, here comes our other boat. HA! Not quite. This was a BIG one! Drove right into town. 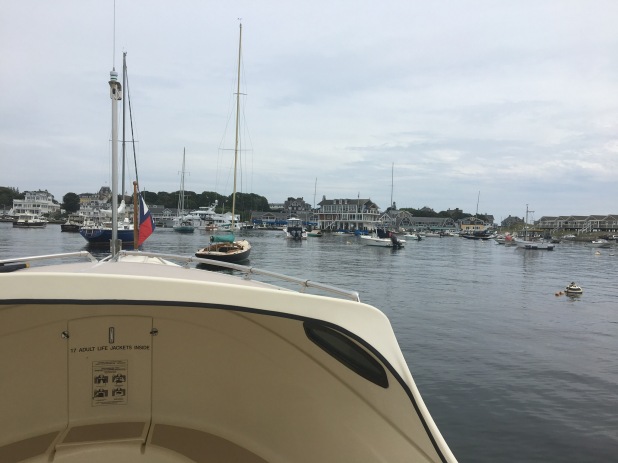 We used our reciprocal privileges from our club and got a mooring ball from Watch Hill Yacht Club – included a launch service. This is the view coming into town on the launch.

And the view from the Yacht Club! We’re one of the little teeny boats way back there.

The Ocean House Hotel – looks right out over a beautiful beach!

Human Resources? Hmmm…. wonder if they’ve got any openings?

This is the beach of the Ocean House Hotel, but the big white mansion on the hill – that’s Taylor Swift’s hangout. In the background on the left is the lighthouse.

I knocked on Taylor’s door, but no one was home. I wanted to congratulate her on her $1 court settlement victory over the __________ (fill in the blank) who groped her. Thought it was fitting that we were in Watch Hill the day that judgement came in.

We went back in that evening looking for dinner in a pretty crowded town. We stuck our heads in the Olympia Tea Room Restaurant. I don’t know why it is called that – there is nothing about the place that resembles a tea room. The place was packed, but two seats at the bar opened – our preferred seating, anyway. GREAT food and where we met Frances. She was an endearing soul sitting by herself, and we struck up a conversation. (I know – shocking.) She is a Rhode Island native and she gave us a great tip on a good restaurant in Newport. She told us which nights she goes there and sits at the bar, and that we should ask for “Uncle Joe” when we go. Would we run into Frances again in Newport? You’ll have to wait and find out! So cute that Frances. I enjoyed saying, “Frances, meet Francis!” (Frank, you know.)

If you’re in Watch Hill, this place has SERIOUSLY good food. And say hi to Frances! They all know her.

We I put a little blue mark where Eleanor Q is parked. Sunset was coming.

We were carefully instructed that the last launch would be at sunset… so we made sure we were back shortly before, but Donna the launch driver said, “You’re going to need to wait a few minutes. I have sundown duty.” No problem, Donna. Sunset duty means setting off that proverbial canon and lowering the flag. There was a small “bang,” and I said to Frank, “That’s a pretty wimpy can—-” and before I could finish, the real canon was fired. When I regained my hearing, I shouted to Frank, “Oh! They have a real canon!” The flag was lowered, properly folded and stored all while anyone anywhere close by stood in quiet respect. How nice. We like this New England tradition. Call me old fashioned! See, there is plenty of civility in New England. 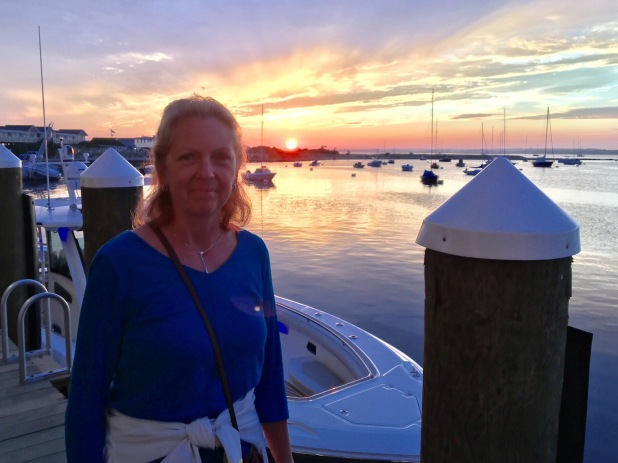 Ems watching the sun about to set… pre-hearing loss. 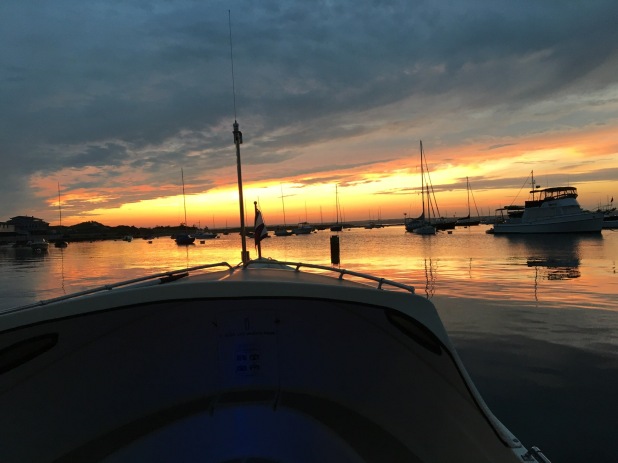 And after sunset duty was over, Donna took us back “home.”

We departed the next morning, happy we’d stopped by. See that little opening in the water to the left? Yeah, you can’t go out that way – too shallow. Frustratingly, you have to wind back down around and out to get to the sound where you are directly on the other side of that little spit of land… and it takes more than an hour.

We thoroughly enjoyed our stay in Connecticut… oh yeah, and in the first little bit of Rhode Island, too. Please tell Taylor we’ll catch her next time.

(Hey Fred, were there enough pictures of me this time?)

Read more from General Posts About Travels
Stonington, Watch Hill
← Long Island Sound of Music
If You Can’t Be Annapolis, Be in Newport! →
9 Comments Post a comment