This will be part 1 of a 2 part post . . . but chronologially it will be out of order!  Today was a momentous day and I want to share it while it’s fresh on our minds. Then I’ll backfill with some other cool stuff from the last week.

I mentioned before that Frank always visualized the day we would take the lines with us and head off into the semi-unknown. That visualization was his sleeping aid. Well,  that day was today. For us, it felt like it was right out of a movie complete with people waving goodbye (well, one person) and a “yeller” dog.  As we pulled away from our slip – home away from home for the last 3 years – we both blinked back tears as we looked at each other and said something like, ‘This is really happening. We’re really doing this.”  The pictures tell it all . . .

Mary Marie is about to throw the lines to Frank . . . the ones that we’re now taking with us!

Dean gives us a hearty send off.

Backing out of the slip for the last time . . . 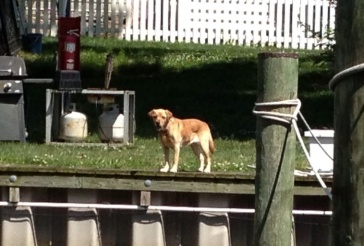 Can a dog break your heart or what? 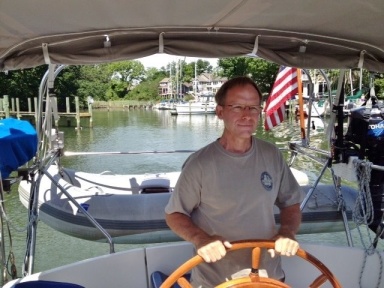 An emotional moment as we pull away . . .

It’s worth talking about Eleanor Q’s Annapolis home for a minute. First of all, there’s Annapolis, and then there’s Eastport. Yes, it’s still part of Annapolis by mailing address, but it is on the “other” side of the harbor from downtown, City Dock and the Naval Academy. It’s where the fun and funky people are who don’t take themselves too seriously. It suited us very well. We were in Stella’s Stern and Keel, a marina made up of about a dozen slips behind a row of houses in a neat neighborhood in Eastport. We found the slip by accident. We had looked at a lot of very expensive and fussy marinas that just weren’t speaking to us and were about to give up on finding something in the Annapolis area when we happended by a small, hand written sign by a house saying “Slips for Rent” with a phone number. We dialed the number and heard a phone ringing close by! The happy sounding voice with a slight southern drawl on the other end said, “Come on in the gate and have a beer with us and we’ll talk!” The rest, as they say, is history. Dean has been a wonderful, caring “landlord” and boat neighbor during our time. He and his wife, Patty, live in a house that he/his company built a while back. It was like living in their back yard and getting to know their friends as they sat around the fire pit or played shuffle board in the yard that was part of the marina. Dean, thanks for the good times and for always being a watchful eye on Eleanor Q when we weren’t there. If anyone needs a boat slip or a house built in Annapolis, we’ll put you in touch with Dean.

So tonight we’re anchored up in Swann Creek in Rock Hall, MD after an uneventful day of motoring under the bridge and up the bay. We are planning our timing to get to the C&D Canal as we make our way out of the Chesapeake Bay and into the Delaware Bay then down to Cape May, NJ by week’s end.

So I asked Frank what he was going to do now when he couldn’t sleep since this was the day he always pictured when he was suffering from insomnia. He laughed and said, “I guess I’ll have to picture buying lobster off the lobstermen in Maine or picture the blue waters of the Bahamas . . . ”

Read more from Uncategorized
← Our First Week of Cruising: Solomons and Oxford, MD
Our Last Week in Annapolis →
10 Comments Post a comment