A Change of Bays: The Chesapeake to the Delaware

The last twelve days have been so action packed including being in a different location every day for the first five days, it feels like it’s been a month! So here is a fill-in on some of our travels… The headline says sit all; last Friday we  moved on from Maryland and the Chesapeake Bay and into the Delaware Bay, ending up where the Bay and the Atlantic meet in Cape May, NJ. We anchored up there for a 4 day stay before moving on to Longport, NJ where we are parked for a few weeks to tie up some loose ends before moving on to Block Island.  So, here’s the trip in two chunks: 1) The northern part of the Chesapeake Bay, through the C&D Canal and down the Delaware Bay, and 2) Our stay in Cape May and then on to Longport. The most expedient way to get from the Chesapeake to the Delaware is through the C&D Canal, a man-made body of water that connects the top of the two bays. (C&D = Chesapeake and Delaware. Get it? Clever, huh?) Let’s start with the first few days:

There was no wind to speak of, so we motored the whole trip ending up in Swann Creek in Rock Hall, MD on the eastern shore of the bay.  We pulled into the popular anchorage and started looking for a good spot (much like parking at the mall at Christmas but a little less crowded and a lot less honking).  So as we’re eyeing up the pack we see a familiar boat and realize it is Freebird, one of the boats we met and shared sundowners with in Oxford!!  We shared our loosely laid itinerary for the next couple of days with our friends as did they. We talked about hoping to run into each other again as they already had plans for the evening. We settled in for a much needed quiet evening, being a little emotionally exhausted from our big day! The next day it looked like the weather could be a mixed bag with a chance of some passing showers. When we set off it was gray and dreary … then we could see a set of dark clouds in the distance. We pulled up the trusty radar map on the iPad to see what was what. It looked like the little system might graze us, so we took down the one sail we had up (motor sailing at that point) and fetched our foul weather gear. If you see Frank in the big yellow coat, something is a-brewin’. 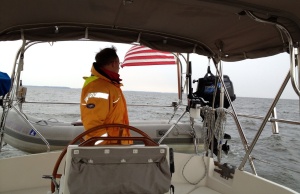 When the yellow coat comes out, watch out.

Ready for a little squall tucked under the dodger.

Happily for us, the squall went around us . . . we watched it. It slid on by just throwing a few sprinkles our way as it went. I was mildly relieved. I think Frank was a little disappointed.We’re slightly different that way. The squall was nice enough to leave us with some nice wind, and we were able to put the sails back up, turn the engine off . . . ahhhhhhhhh,  . . . quiet! . . .  and enjoy some good air for part of the trip. We decided to take our new friends on Freebird up on the offer to meet up in Worton Creek, so that’s where we headed.  The first time we talked to them, we asked them why the name Freebird. “Lynyrd Skynyrd . . . Freebird. You know!” We did indeed; just didn’t want to assume they were Skynyrd fans, you know? So we anchored up right beside them, chatted across the water and agreed to meet for happy hour.  Being the new cruiser, I asked an ignorant question: what time? I got the same reaction I got the first time I asked Dave that question in Oxford: “5:30!” said in a very kind but surprised voice, like, “Come on . . . you have to ask?” (Several days later in Cape May, a boat invited us over for cocktails. I asked, “What time?” Answer: “5:30!” When will I learn?) We parted ways for the rest of the afternoon to do our own things on our own boats. Frank and I broke out the guitar and tried to learn “Freebird” to seranade them later. Yes, I was trying to sing Freebird . . . you can only imagine how inauthentic that was, but it was fun all the same.  In the end we chickened out from trying to do the whole, live version for them. Decided we weren’t quite ready for prime time. I think Frank was mildly relieved. I was a little disappointed. We’re slightly different that way. 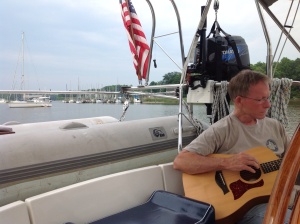 Anchored up in Worton Creek trying to learn “Freebird”

Freebird parked next to us in Worton Creek. Such a cool boat.

We took our beverages and some snacks to contribute – that is proper cruisers etiquette: take your own liquor and bring some snacks to share – and hopped on their Southern Cross 31.  Karen and Dave, in our minds, are the model, old school, original, hard core cruisers and we had a great time with them. They shared more valuable information about the Bahamas and loaned us a book on identifying fish in the Caribbean. Dave talked about how to spear fish for lobsters. I’ll be curious to see if we work our way up to that! Next winter if you see a picture of Frank holding up a lobster in one hand with a spear in the other, ask him if he caught it. If he says, ‘What’s your definition of ‘catch?’ be wary. Next day we headed north again. Now during these three days, much gnashing and grinding of teeth was taking place trying to figure out the tides and the currents in the C&D Canal and the Delaware Bay. Here’s the deal: There is a pretty significant shift in current in the canal at different times of the day. And there is BIG influence on what kind of headway one can make (particularly on a sailboat) based on the tides in the Delaware Bay. Trying to go against the tide means going nowhere fast and burning up a lot of fuel to do it. So we studied the charts and asked a lot of advice trying to get our plan of attack together.  We decided to anchor up in Chesapeake City which is just inside the canal on the Maryland side. That would be our launching off point for the next day. The canal is a man-made body of water that was completed and opened in 1892. It cut down the shipping route from Philadelphia to Baltimore by 300 miles by cutting across a small strip of land that separated the two bays, making the cost to move goods by water more economical. This may sound like a set of boring statistics that I’m about to throw out here, but it comes into play in picturing our passage through the canal. The canal is 14 miles long, 40 feet deep, but most importantly, it is 450 feet wide. I’ll come back to that part. So here’s the deal with the canal. See aforementioned 450 feet wide stat. Commercial traffic travels the canal. Commercial. As in stinkin’ big. Giant. Tankers. The beam (width) on some of these babies is 300 feet. So 450 minus 300 = 150 feet. We’re 13 feet wide so that leaves roughly 137 extra feet to split between the side of the canal to the side of the tanker to the side of you to the side of the canal. Get the picture? That isn’t really a lot of room. I’ve been a little apprehensive. Here’s the pictorial of our visit to Chesapeake City and the trip through the canal. 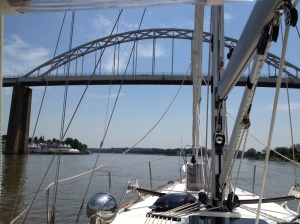 Frank on the bow as we finish anchoring. Not sure what he was pondering at this point . . . 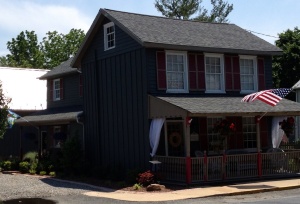 SO what’s the big deal about traversing the canal, anyway? . . . .OhhhhHHHHH! 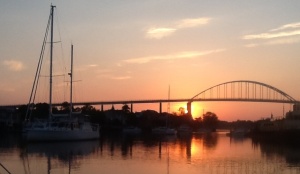 Frank captured this sunset before calling it a day.

So our plan of attack: Leave Chesapeake City mid-morning to get the favorable current in the canal and anchor up at the top of the Delaware Bay to wait for a more favorable tide the next day. Good advice that we got: be a little concerned about the current in the canal. Be A LOT concerned about the tides in the Bay. Hey, we’re not in a hurry to get anywhere! We’ll wait. 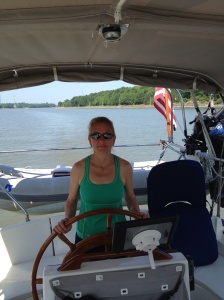 Ems piloting through the canal.

We got into the canal, and you know what happened? Nothing. Nada. If we saw five other small pleasure crafts all day long, that was a lot! I was mildly relieved. I think  Frank was a little disappointed. We’re slightly different that way. It only took us about 2.5 hours to get through the canal, so we arrived at Reedy’s Island around lunchtime with the rest of the day to kill before our pre-dawn launch down the Bay the next morning. Cool things about where we anchored: 1) It was 15 degrees cooler than land, and that was the day it was 90 on land. 2) There was pretty much no one around; we had the anchorage to ourselves. 3) It was very scenic . . . well . . . if you only looked to the west, it was very scenic. However, if you looked to the east . . . well you’ll see in a minute. Note to boaters: the current change was VERY strong. The boat swung around 180 degrees as the tide changed which was an interesting test to see how the anchor would do. It did fine.

Tucked behind the island, we see the first of several tankers we would have met in the canal if we had left a couple of hours later!

Hanging out in the cool breezes of Reedy’s Point enjoying a delightful afternoon.

Frank perching and admiring the view (to the west).

I am not the world’s best early morning person (Frank would call that an understatement), but when I DO get up at that time of day, it can be so nice! Here is our pre-dawn departure.

THIS was the view to the east. We chose not to go crabbing in this spot. Good Morning Salem Nuclear Power Plant!

As the sun started to pop up, I decided we needed music on the stereo, so I started quickly assembling a short “Sunrise” playlist on the iPod. I was able to grab Norah Jones’ “Sunrise”, “Sun King” by the Beatles, followed by “Here Comes the Sun” (of course!).  Any helpful suggestions on what to add to the playlist for the next early departure would be greatly appreciated! The trek down the bay was uneventful and pleasant, although not much sailing and a lot of motoring involved. We did get the main sail up to help the engine for a while when the wind direction was cooperative. About seven hours later and we were in Cape May, home town of Captain Frank Edward Quigley. He pointed out the spit where he sank the Marjorie Snow. I won’t share that story on this blog. Frank will be mildly relieved, but I’ll be disappointed. We’re slightly different that way.

The Lighthouse at Cape May Point as we round the tip of NJ.

Read more from General Posts About Travels, Uncategorized
← Our Last Week in Annapolis
Cape May and First Day in the Atlantic →
7 Comments Post a comment