Break’s Over; Back on the Water! 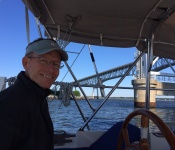 It has been more than two months since our last blog post . . . we have not sailed off the edge of the earth!!

We actually hit the pause button on our sailing adventure to some extent. There are a few reasons for this:
1) Our bodies needed the break;
2) Frank’s mind needed the break;
3) Eleanor Q needed a break and some maintenance work.
4) We wanted to spend some quality time with family.

We secured our old slip in Annapolis to use as a home base for the summer and have been splitting our time between there and our house in New Jersey. We pulled back in that good ol’ slip 364 days after taking the lines with us in 2013, and we’ve taken this time off to reflect on our year. This post will touch on some of those reflections and also do a quick review of what we’ve been up to this summer.

Reviewing the year: it’s been an amazing year and we wouldn’t trade it for anything! It had some things that we expected; it had some things that we didn’t expect. We learned a lot about ourselves and each other. We saw some spectacular places and we met some wonderful people. (We ran into very few “knuckleheads”, as a matter of fact!) We accomplished our goal of sailing from Annapolis to Maine (Acadia State Park – Northeast Harbor), then south to Georgetown, Bahamas and back to Annapolis. That’s somewhere around 4,000 miles and we feel very proud of that! I felt good about advancing my nautical skills with the help of my captain and coach (that being one and the same person). People ask us about our favorite places and there were so many highlights it’s really hard to narrow down. There were special places all up and down the U.S. coast and in the blue Bahamian waters. Ones that jump out: Shelter Island, NY, almost everywhere we saw in Maine (in spite of the fog and lobster pots), cruising through New York City, The Dismal Swamp in VA/NC, The Wacamaw River in Georgia, Warderick Wells, Black Point and Hope Town in the Bahamas, Ocracoke in the Outer Banks of NC, Southport, NC . . . the list goes on. Spectacular places, all.

What we found a little surprising: we knew it would be hard work, but I think it was harder work than we anticipated. We worked well together on charting and piloting and figuring out the tides and the currents so as to plan our route for each part of the trip. But Frank bears the brunt of all mechanical responsibilities, and there were more of those than we expected. Every boat has issues; we were not so naive as to expect that we’d have no issues. The number of issues we had along the way was somewhat of a surprise. We were very fortunate that none of these issues ever put us in danger or happened underway so as to create maneuvering issues (much). We are fortunate that Frank is as mechanically inclined as he is . . . he was able to get us out of a number of jams. But that was probably the most challenging aspect of the trip. We travel with lots of spare parts, but there are times that you don’t have the ONE thing you need for a repair. You either do a lot of “McGuyvering” or you get on the radio and call around to see if someone else has what you need. We always managed our way through those situations. Sometimes they ended up being very expensive solutions, though (i.e. having a part flown to the Bahamas from Ft. Lauderdale. Yuck). Those moments can be very mentally taxing and the repair work itself can be extremely physically taxing for Frank . . . everything is in such a small space you practically need to be Gumby to access some of the engine.

We set out saying we would do this for two years. We approached it that way so we wouldn’t second guess our decision after a year and would just keep going, knowing the second year would be easier. Well, we’re not second-guessing our decision to have gone in the first place – this year was priceless. But now there is some discussion as to what year two will look like. (Let me note, whatever you’re reading here is a mutually agreed upon message.) These discussions haven’t always been easy ones. Why? Well, here’s an interesting thing that developed over the course of the year that neither one of us saw coming: I (Ems) took to this cruising thing like a duck to water. Not having grown up around water and never having sailed before five years ago, this has been a journey for me to get to a point where I felt that living on a boat and traveling thousands of miles was something I could be happy doing. Well, not only have I adapted well, I have thrived in the environment; however, it has fallen a little short of Frank’s expectations. You know when there’s a good movie out that EVERYBODY raves about and tells you “You HAVE to go see this move!” And then you go with these huge expectations, watch the film, and then walk out saying, “That was okay, but it wasn’t THAT great.” I have fallen madly in love with cruising – and I had no expectations when we left. I really didn’t know WHAT to expect. Frank thinks it’s pretty good, but not as idyllic as he had pictured in his mind a thousand times. And when he has time on his hands out there on the water, he’s thinking about the fact that he’s pretty far away from family if anything should go awry. And he’s missing the competition of work and making the numbers. And he’s wondering what’s going to break next on the boat . . . and, and, and . . . you get the picture? Bottom line is Frank is the one who is trying to determine how he feels about this cruising thing while I am feeling pretty restless being on land for this long. When we met people along the way, they would ask, “Oh, are you retired?” I would jokingly say, “I’m on sabbatical,” and Frank would enthusiastically say, “I’m retired!” Somewhere along the way, he adopted my sabbatical line, too. I should have seen that as the first sign. Figuring out what we’re going to do this fall has made for some interesting conversations this summer during our sabbatical from our sabbatical.

Well, at last, we set sail this week with the plan to visit to Nantucket and Long Island Sound for the remainder of the summer. We’ll come back through the area again later in September and plot our next moves. Will we go south again or will we find something else to keep us stimulated, put cruising on hold and return to it again at a later date? We’ll let you know. If you’re betting people, start putting the pools together now and stay tuned for later results! Meanwhile, we’re taking the next couple of months to go back to cruising!

Here are a few highlights from our summer . . . 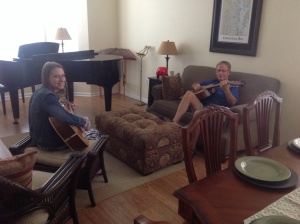 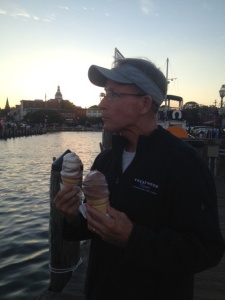 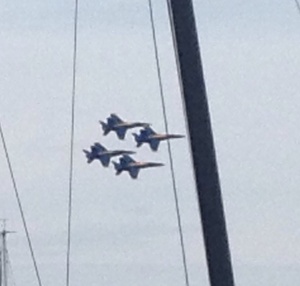 We cruised the bay – Mandela is following us through Knapps Narrows Bridge here . . . 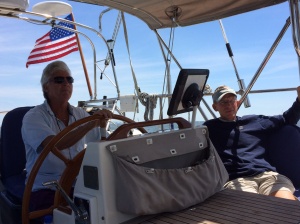 Finally got Dean and Patty (our slip “landlords”) on the boat for a few hours. . . 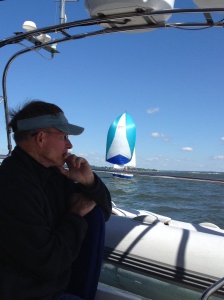 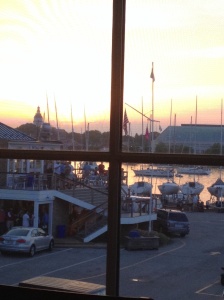 We hung out at the Eastport Yacht Club . . . 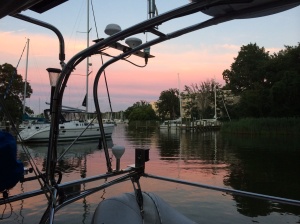 We enjoyed some quiet evenings in our slip In Back Creek . . . 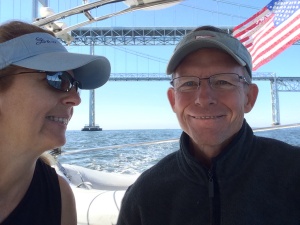 And then we left the Bay Bridge behind us and headed north . . . 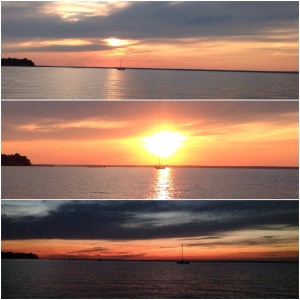 . . . and once again sailed off into the sunset.

Read more from General Posts About Travels
← Returning to the Bay . . . in a Jam, So to Speak!
Heading North: Adjusting on the Fly! →
4 Comments Post a comment