Quick update first: we are currently back in the Annapolis area for a little while to visit home, see family and get some work done on the boat. We have completed an entire year of cruising and will take a little rest and reflect on our adventures. More on that in another post.

But right now the story of our re-entry into the Chesapeake Bay. Well, we were so excited to get back in the bay. We had transited the Dismal Swamp and passed through the Norfolk/Portsmouth, Virginia area (wonderful boat watching territory passing by the navy boats in port).

The planets and the universe aligned and, almost totally coincidentally, we were about to reunite with our water family on Magnolia and Mandala. We had no idea that Mandala was at the end of a 5 day passage straight from the Abacos into the Chesapeake and were about to land 10 miles north of us until we happened to hear them on the radio. We had been in contact with Magnolia and they were planning to hold up in Solomons, Maryland so we could catch up to them and have one more night together to celebrate our year of cruising before we all went back to our separate ports. But as it ended up, we all decided (mostly independently) that we would head to Deltaville, Virginia that Saturday . . . and we were all going to end up there together! Happy day!

Magnolia was already at anchor in Deltaville. Mandala and Eleanor Q were headed there. All was going well. We had fair current and were blazing by Norfolk at about 9.5 knots – very fast for us! We converged paths with Mandala and had about two hours to go to Deltaville when we were hit by severe thunderstorms – our worst weather of the entire year. But we had plenty happen before the storms . . .

The winds had been perfect at about 15 – 18 knots. The conditions were great. I went below to fix peanut better and jelly sandwiches for lunch. (Hey – they’re fast and easy. Don’t mock.) The sandwiches were done but laying open on the counter. The jam was still sitting on the counter. Suddenly, a freak rogue wind came out of nowhere. We had all three sails completely out. Frank was at the helm when, in about thirty seconds time, the wind went to 20 . . . 23 . . . 26 . . . and then hit a sideways gust at 30 knots! We do not want to be under full sail when that happens! The boat heeled over hard and was nearly sitting sideways. (We were not in danger – they are built to do that if they have to and our boat can take it . . . but it isn’t ideal.) I was still below when it hit and I heard and saw stuff starting to fly about. I had secured things pretty well, but there are a few extra books or magazines or other non-breakable stuff that will fall off of some shelves if I haven’t taken extra care. No big deal. It’s “just” the bay, right? We weren’t in the ocean or the gulf stream. How bad is it going to be? Mistake. I had dishes stored in the microwave. Pitching sideways with such a violent force, the latch on the microwave door didn’t hold and the plates became projectiles across the galley – they flew the complete width of the boat. We have very little that is breakable on the boat – no actual glass glasses for example; but we do have some heavy ceramic plates for our bigger dinners. You just don’t always feel like eating off of plastic, you know? Anyway, I thought the microwave was a secure enough stowage unit for them. On a normal day, it is. But this was freakish. The ceramic broke with such intensity that I was picking shards out of the wood. Broken pieces of plates were everyhwere. It looked like a tornado had come through. But to add insult to injury, the peanut butter and jelly sandwiches flew with the dishes. Worse than that, the plastic jam container had still been sitting on the counter and was sliced wide open by the flying shards. Strawberry jam was everywhere. I am still finding jam on the ceiling today. I was in such shock as I saw the damage . . . beautiful wood on our boat with big gouges in it. Broken plates all over. I couldn’t even figure out what had just happened. But first matters first – Frank was calling to me and I ran up top to quickly help him get some sails in. He had already headed up into the wind to get the power out of the sails which cured the heeling immediately. (That sentence sounds like an oxymoron or a joke or something . . . “cured the heeling.”) Anyway . . . once things up top were in control, I went back down below to start the clean up. Hey, it’s just stuff and some bumps and scratches, right? No people were damaged so no big deal, right? I have an odd aversion to things like glass breaking. I told Frank this a long time ago; he understands this about me. It is irrational and I don’t know where it comes from. So I will confess openly right now . . . I cried the whole time I cleaned up. Hard. I wish I could explain why, but I can’t. It was just the surprise of it, I think. I briefly thought about taking pictures of the mess, but there are just some things you don’t want to look at again.

So then, just as oddly, ten minutes later the wind died. Nothing. Caput. We were practically becalmed. I am not making this up. Guess what that meant? The black flies showed up. Droves of them. All we could do was keep swatting them away from our ankles which became the fly buffet for the day. It was miserable. We are fortunate that we have screens on the boat, but each time we had to go down below, a portion of the swarm would try to sneak in, I must admit, killing flies down below became therapy for releasing my angst over the earlier episode.

An hour later we got hit with the severe thunderstorms. It was a day of total extremes. We got ready by donning our foul weather gear and pulling in all of the sails. The storms hit hard. The VHF radio was blaring warnings to mariners. We had nowhere to hide – we just had to gut it out.

Getting hit from two sides!

Frank looking at the storm’s progress.

Again, our boat can handle it and I have a very competent captain who knows how to handle the boat in these conditions. He’s been telling me for three years that I need to experience a Chesapeake thunderstorm – well, he finally got his wish. We had sustained winds of 40 knots with gusts to 48 for more than thirty minutes. It was not much fun. And in the midst of that, we were going through a minefield of crab pots. My job was to watch for and point out the pots. I was tucked under our dodger and somewhat protected. Frank was getting soaked. For the bay, we had some pretty good seas. He slowed the boat down and put her nose right into the wind and just rode it out. That’s about the best you can do. Mandala was close by, so we knew we had company! Meanwhile, Magnolia was in the anchorage, but their anchor was dragging n the storm, so they had issues of their own! Oddly enough, as uncomfortable as it was, we laughed later at the fact that I was far more upset at the broken dishes and jam episode than I was over the thunderstorms and high winds. I don’t know what that says about me. 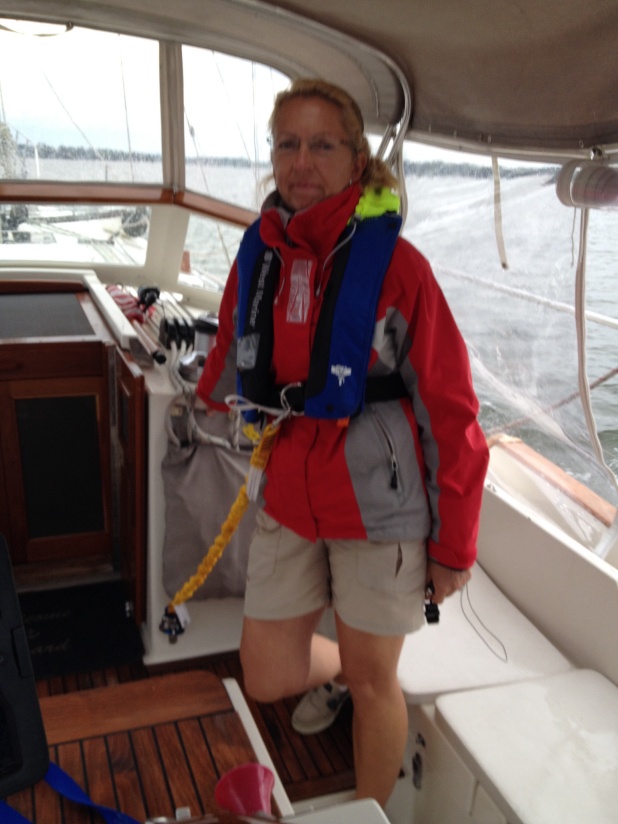 Whew. Through the worst of it! We were both safely tethered to the boat.

Bottom line: our three boats met for dinner aboard Magnolia and had great stories to tell about the day over good food and wine and great company. Mandala has spent just a little time on the bay (they are from Maine) and we assured them that they got the worst of what the bay has to offer all in one day – there is nowhere to go but up! We were rewarded the following day with the most beautiful weather conditions and the beauty of the bay as we generally think of it.

All’s well that ends well . . . but that was a little bigger splash back into our home waters than we were bargaining for! Ending the day next to our water family reinforced an abiding concept: “If you’re ever in a jam, here I am!”

(Bonus points if you get the musical reference.)

Read more from General Posts About Travels
← Moving North Fast: The Carolinas
Break’s Over; Back on the Water! →
14 Comments Post a comment