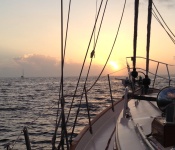 We had been in Bimini for almost a week waiting for the “weather window” to go to Nassau. Well, the window came. The trip to Nassau is about 100 miles requiring an overnight passage – not typically one of my favorite things to do, so I was looking forward to getting this behind us. But this passage turned out differently from the others because we ended up getting absorbed into a “fleet” of boats making the same passage. They were a group of Canadian boats and they called themselves “The B to B Fleet.” I’m not certain, but I think that stood for “Biscayne to Bahamas” since they met in No Name Harbor in Biscayne Bay. There were about 10 boats total, and the fleet captain would hold a check in every hour on the radio. Each boat would give a report of their position and conditions. We were all within a mile and a half of each other. Frank and I did 3 hour shifts – longer than on day trips – so that the other person has the hopes of catching a real nap. It was a big graduation day for me because he felt comfortable enough to go down below for 3 hours at a time with me at the helm overnight. That was a big deal. Anyway, the comfort of having a group of boats around and looking forward to the hourly check-ins was helpful. I got the 1am – 4am shift. Never in my life have I seen that many stars. Other noteworthy things about the crossing: the first part goes over the Bahama bank which is hours of going through water that is 10 – 15 feet deep – shallow. Then you get to the Northwest Passage into the “Tongue of the Ocean.” That’s where you transition from the shallow water of the bank, through a cut and into the open water. Frank took us through that part, but I had to stay up long enough to watch our depth finder go crazy. We were looking at 20 feet of water, and then the numbers started soaring up . . . and then it did that blinking thing when it can’t compute any more. The ocean drops off to a MILE deep. A mile. What kind of glacier did that architecture? A poignant moment came at the early dawn check in when our friends on Mandala shared with the group that their on board 18-year old cat passed away during the crossing. They found it fitting to have a burial at sea at the Tongue of the Ocean in the mile deep water. The air waves got strangely silent as I think a couple of tears were shed throughout the fleet.

Leaving Bimini as taken by Time and Tide

Mandala in the sunset.

Sunrise approaching Nassau with Magnolia in the dawn

After a quiet night of listening to good music and watching the stars and going through a couple of early morning rain showers, at 8am we were pulling safely into Nassau Harbor (after radioing Harbor Control and requesting permission to enter, of course.) We slid by cruise ships and mail boats and ferries to get to our home for the next few days at Nassau Yacht Haven. 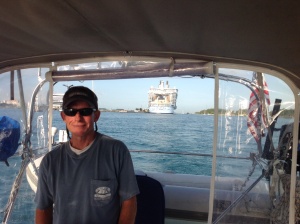 Traffic in the Harbor

Our first day was catching up on some sleep and doing laundry. The second day was spent walking around Potters Cay by the docks and then across the bridge to Paradise Island area and the Atlantis Casino. You know we had to drop by there and see if we knew anybody working. We did not.

Frank checking out the fishing boats of course. 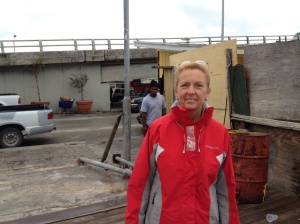 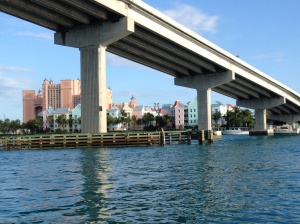 Mega Yachts in the marina at the Atlantis.

But our next day was the day I had been waiting for and the main reason to pass through Nassau: to visit my friend Mr. Rolle.

I met my friend Mr. Rolle on an airplane about ten years ago. Mr. Rolle and his wife and much of his family are Nassau residents. He and his wife were flying back from the midwest and their flight had been canceled. They were put on the last two seats on the plane I was on and his seat was right beside mine. He was sweet and engaging and we shared a background and love for church music which made for easy conversation. We were friends by the end of the flight and exchanged information and promised to keep in touch. Before we got off the plane, Mr. Rolle sang “God Be With You ‘Til We Meet Again” to me. And then we became pen pals and he would periodically phone to check on me and to let me know he was keeping me in his prayers. He was much better at keeping in touch than me, but we kept the thread going over the years. And then when I said that we’d be sailing to the Bahamas, we hatched the plan to set up a visit.

So I was very excited when Mr. Rolle called me to say that his daughter, Sharrie, would be driving and they would come pick Frank and I up at 10am at the marina, show us the island, take us to the house for lunch and then return us later in the afternoon. I was so excited when the car pulled up and I saw Mr. Rolle looking nearly the same as he did ten years ago! The four of us took off and Sharrie was a great tour guide showing us the sights of the island that we would never have been able to see by foot. We saw neighborhoods and developments and schools and churches, and the town center and then stopped by “The Caves” for a look around.

Hanging with Sharrie and Mr. Rolle

The Caves – The Buffy Flower Bat lives in this cave. I did not call out to the Buffies. I just took the sign at its word and called it a day.

Next we went to their home for a delicious lunch and I finally got to meet Mrs. Rolle! They filled us with wonderful food and we enjoyed fun conversation. I was very touched that two of the pictures that I had sent to Mr. Rolle had made it to his bookshelf of family photos: a picture of Frank and I and a picture of my father and I. A little more history: Mr. Rolle sent me a copy of his CD of hymns, and I told him the story of listening to his CD in the car when I drove home from Princeton after my father died. So I had to catch a little breath when I saw the picture of me and my dad there. Mrs. Rolle was very warm, gracious and beautiful.

She/they have raised a large flock of children and she is a retired school teacher. And they have quite the flock of grandchildren as well! Their children hold various jobs in the community, were raised to volunteer their time to help those less fortunate, and are all very active in their churches. Like her father, Mr. Rolle’s daughter, Nadia, is a great pen pal and has recently been the family communicator with me since I could send her emails along the way to update her of our plans. So I was so thrilled that Nadia was able to zip home on her lunch break from the high school where she teaches so we could meet face to face, even though it was only long enough for a quick hello and a hug! So shout out to my new Facebook friends Nadia and Sharrie!

Then we stopped by the Rolle’s home church (by my request!) and Mr. Rolle and I spent a few minutes having an impromptu hymn jam session in the church. (Can you use those two terms in the same sentence?) He sang and I would try to fill in with some accompaniment behind him on the piano. I could have done that for hours. What a smooth, crooner’s voice! Frank looked on and smiled. He knew I was having a good time!

Mr. Rolle and I jammin’

And then it was time to go back. I was so happy to get to see my friend and to get to know more of the Rolle family, and I look forward to our sailing travels taking us through Nassau again in the future so we can visit some more.

And so, my friends, that’s how we roll in Nassau.

Read more from General Posts About Travels
← Arriving in the Bahamas – Another Moment in Time
Hello Highborn: Into the Exumas →
5 Comments Post a comment