Arriving in the Bahamas – Another Moment in Time 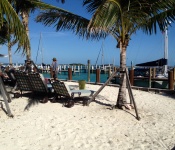 There have been a few significant (to us) moments in our adventure so far which is now going on eight months . . . moving onto the boat, taking the lines with us, our first overnight passage, making it to Northeast Harbor in Maine . . . and the latest, as of December 30th, 2013, was making it to the Bahamas. We just looked at each other shortly after arrival, and one of us said, “We just sailed from Maine to the Bahamas!” That was followed by a quiet fist bump and a look of understanding between us. For many salty sailors out here, that’s child’s play. For us, that’s still a pretty big deal. Here’s how it went down:

We staged our departure from the U.S. in Biscayne Bay just south of Miami. We listened to and studied all the weather information we could get our hands on looking for the right weather window.  The weather and wind direction/speed determine what part of the Bahamas to aim for and whether it will be a day trip or an overnight trip. There are LOTS of islands in the Bahamas, so you have to determine which part of the Bahamas you want to visit. We chose to do the 50ish mile day trip from Miami to Bimini. Our next jump, which will be longer and will require an overnight trip, will be to Nassau. Then we will head down to the red chain of islands, the Exumas. If we can tackle that much in the next few months, we will be thrilled. We have learned from this summer that you can’t see and do everything, and that you can wear yourself out trying and not have nearly as much fun.

You can see how close Bimini is to Miami here.

Okay, basic geography complete, back to our trip to Bimini! The significant part of that trip is that you have to cross the Gulf Stream. When you plan your route to Bimini, it looks like you just set a course with a straight line from Miami to Bimini, right? Not so much. The Gulf Stream flows from south to north, so you aim the boat slightly south of your mark so that when you get into the Gulf Stream you aren’t trying to fight it, but you let it take you upstream a bit. Basically your route ends up looking like a sideways “S” by the time you’re done. We were very fortunate to have picked a very benign day!! The winds were quite calm, so we had to motor sail (which was fine) and the Gulf Stream wasn’t all that noticeable when we got in it! The interesting thing is that the depth on our route ranged between 1,500 and 2,500 feet. Yup – that’s deep. Our depth finder just laughed at us when we got into those depths. It’s so deep it doesn’t read the depth . . . can’t send the signal that far . . . so it just blinks at you, like, “Yeah, right. Talk to me later when you get back in the hundreds!”

Frank and I have both gone through our various phases of anxiety prior to this crossing. Generally we would trade days (which is good). Some of it, for me, was the anxiety of the crossing itself. Some of it was leaving the ease and comfort of the U.S. with good cell phone service and internet. Some of it is being far from family at a time when I feel I should be closer. Frank’s anxiety was mostly around being MORE separated from family and always his anxiety is about making sure the boat is in safe and working order. We had ourselves pretty worked up by the time we left and neither of us got much sleep the night before we left. I say all that to lead to this point: a strange thing happened when we got in the middle of the Gulf Stream with no land in sight in front of or behind us . . . we relaxed! We couldn’t check the internet, so we DIDN’T obsessively check it every five minutes as we are known to do. It didn’t make our concerns about family go away, but we did look at each other and say, “What were we so worked up about?” We just let go a bit.

There were probably a dozen other boats within sight of us most of the way. We passed a couple of tankers along the way. We saw a couple of squalls in the distance, but we were lucky that we dodged them or they dodged us. Frank said he did notice a water spout off in the distance which he wisely did not mention to me. I think I watched the Wizard of Oz at too early of an age and have a rather keen dislike of anything resembling a tornado. But the squalls were small and isolated and had no impact on us.

Leaving Biscayne Bay in the early hours of the day.

Magnolia took this shot . . . makes it look like we’re chasing down the freighter! I promise we were not as close as this makes it seem.

Captain at the helm underway to Bimini! Magnolia behind us.

We could see a little squall in the distance. Look carefully you’ll see a sun dog! (mini rainbow)

Rainstorms actually show up on radar. Here’s the one we were keeping an eye on – the big yellow blob..

At this point we were traveling at about 6.3 knots. We decided not to play chicken with the storm and hung a left to avoid it. That was the first time we could really recognize the Gulf Stream . . . changing our heading put us more directly in the flow (instead of perpendicular to it) and we shot right up to 8.1 knots!! Nice. We were only about 8 miles from Bimini and on the home stretch! 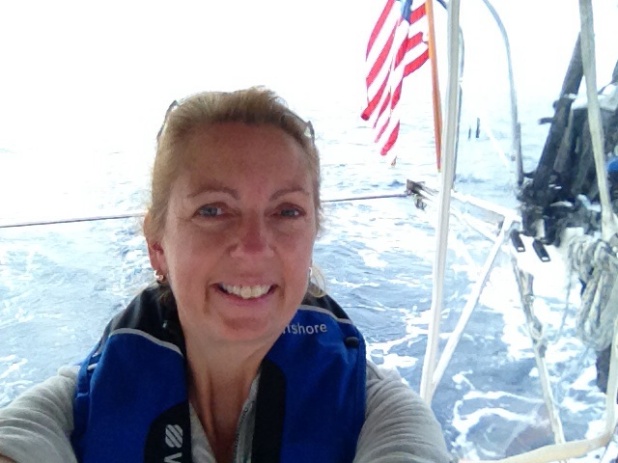 Ems on watch and feeling pretty good with Bimini in sight!

Even after seeing pictures, we couldn’t get over seeing how blue the water really is.

As soon as you arrive in the Bahamas, you must clear customs. From the time you get into port until the time you clear customs, vessels are required to fly a yellow quarantine flag, seen below. The marina provided us with all the necessary forms to fill out and then only the captain can go to the customs office armed with paperwork, boat documentation and passports while the rest of the crew must stay with the boat until cleared. We were given the advice that one should dress very neatly and respectfully to go deal with the customs office. Frank put on a nice shirt and khakis for the trip (even though it was quite hot!) He came back with the news that it may have been overkill, but better to err on the side of too much respect than not enough! The customs and immigration people were friendly and helpful, and he returned with our clearance for 90 days and the fishing licenses that come with that! (Do you need the fishing license to fish or to catch, because if it’s to catch, Frank may not need one at all!) 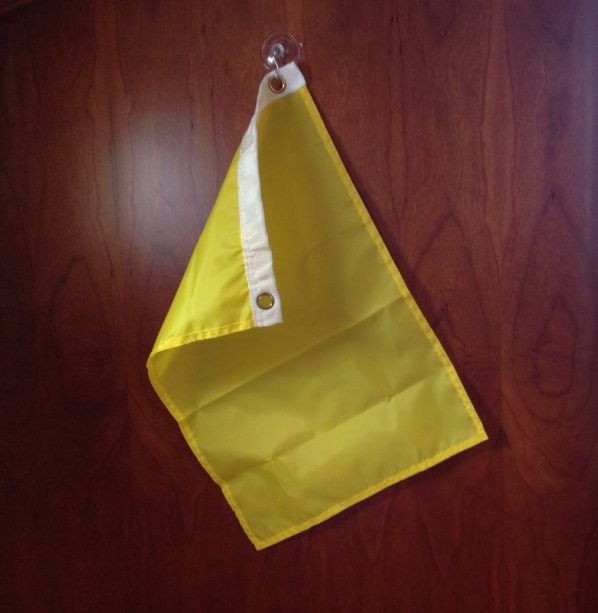 Quarantine flag at the ready. 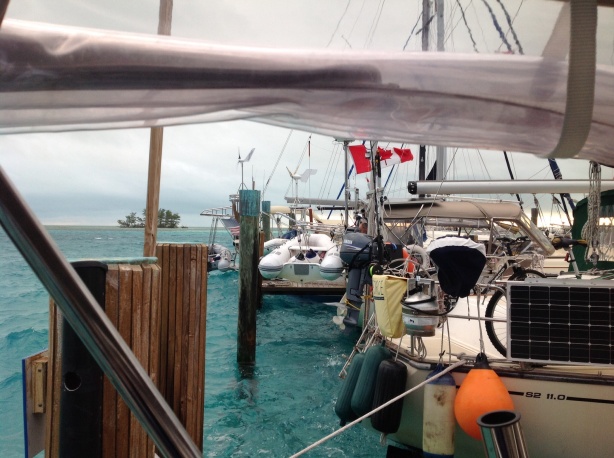 We came into Brown’s Marina with a flotilla of boats from Canada! We have had a fun several days getting to know our boat neighbors in the marina. 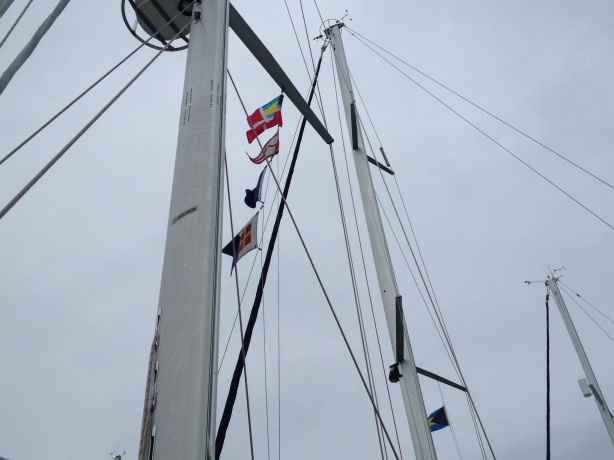 Customs cleared, we could take down the yellow flag and raise the Bahamian courtesy flag. Excellent.

After walking to the BTC office to get cell phones and SIM cards for communications, the exhausted crew stops at Big John’s for dinner. Dinner is coming . . . I know all you see are beers.  Anthony is behind the camera. We all toast to the fact that we made it to the Bahamas by boat.

One of the boats in the marina took it upon themselves to organize a cruisers pot luck the second night here which was also New Year’s Eve. The marina has a beautiful area with glass top tables and charcoal grills which we took full advantage of. A good time was had by all getting to know other cruisers and swapping stories and agendas for the winter. The following days have been full of walking on the beach, fishing from the docks, visiting with neighbors, New Year’s Eve parades, walking along with the Junkanoo parade and general fun and relaxation.

Annette and I took a great walk on the beach our first full day and explored town.

The Dolphin House is a beautiful building and museum owned, operated and decorated by an artist who has used scraps from the sea and other sources to make mosaics of every inch inside and out.

Ashley is the artist and visionary behind the Dolphin house. He gave Nancy and I a tremendous tour!

This was the after church New Year’s parade with the community band. The women looked beautiful in their all white outfits!

I like any place where there is so much dancing in the streets!!

Crocodile Dundee heading out on his fishing excursion with one of the other men in the marina. He did, in fact, catch a few little snappers and several barracudas (which went back in.)

Annette and I at the Junkanoo parade!

Dancing in the streets! I had a cute little dancing partner.

Other sundry activities included renting a golf cart to tour the island, eating conch salad fresh made by the water, and meeting more new friends

We are all waiting for the next weather window to make our next trip over to Nassau. The “forced” down time has been just perfect. The weather has alternated between hot and humid to gray and breezy and everywhere in between . . . but it has all been beautiful (especially looking at pictures of snow back home this morning!) While sitting in a lounge chair overlooking the marina the other afternoon, Frank looked as content as I’ve seen him look in a while and said, “Now THIS is what I signed up for.” We have started a whole new, amazing phase to our cruising.

“This is what I signed up for.” – Frank Quigley