Leaving the Exumas: The Good, the Bad and the Ugly 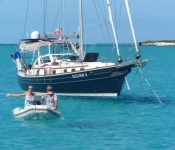 If you remember last post, we had enjoyed a two week “vacation” in George Town – our southernmost point in the Exumas. We started heading back north up the chain, retracing some of our steps. We ended up back with some of our buddies from the “B to B Fleet” – the group we had ended up with in Bimini and who we traveled with when we did our overnight crossing from Bimini to Nassau. It was good to reunite and we traveled up the coast from George Town with three of the fleet: Amaroni II, Mar-a-Lago and Luna. It was fun chatting with them on the radio and traveling in a pack again. They stopped in Little Farmer’s Cay while we went on to Black Point Settlement. We had sped through Black Point the first time, so we looked forward to exploring a little more this time. We spent four days there and got more acquainted with some of the local businesses and people. We found Black Point to be extremely cruiser friendly, helpful, service-oriented and welcoming. That was the good part of our visit. Ida at the laundromat is the best. It is the cleanest place you’ll find to do laundry anywhere, and it is large for these parts. She runs a great business and now trims hair (which both of us took advantage of).

Frank getting a trim from Ida. The best view from any barber chair!

We bought beautiful bread off of Lorraine’s mother of Lorraine’s Cafe fame. We had fun chatting with some movers and shakers of Black Point while sitting in Scorpio Bar and Restaurant. Another evening we enjoyed a great Happy Hour there with part of the B to B fleet (hey Brian, Jane, Bruce and Claude!). But not everything about our visit was good. We stayed there for four days. We were only going to stay for one or two. But not so fast . . .

Let’s me see if I can take you through the good, the bad and the ugly:

– Good: Met up with our friends Bert and Prue on Exuberant and had a lovely evening with them on their boat. Discovered that they have the same dinghy engine and have had similar issued. The two men pow-wowed. Also met up with a couple on Sans Cles who we’d been wanting to get more acquainted with since we have mutual friends and had met briefly at the gam in Annapolis. We had a great chat with them, and they have the same dinghy engine. The two men pow-wowed.

On our way to Exuberant for sundowners. I didn’t MEAN to cover up Frank’s face! I think it was best at that moment, he was saying bad things about the outboard engine.

– Ugly: after many hours of maintenance, dinghy engine still not cooperating. After the engine stalled just as we got to the dinghy dock, upon finishing our errands, we started paddling back to the boat (which wasn’t too far), but . . .

This outboard is dead to us!

Good: A couple came by in their dinghy to see if we needed a tow. I loved how they asked. They said, “Are you rowing because you WANT to or would you rather not be rowing?” That cracked me up. We said it was not by choice, and they took our line and towed us the rest of the way. Come to find out it was a couple that we’d been keeping an eye out for, and they for us, because we have a mutual friend! THAT was a small world moment when we discovered the connection as we approached the boat!

Ugly: While Frank was doing some preventative engine maintenance, he discovered that our raw water pump was about to go. What that meant is that the engine couldn’t be run until we had a new one installed . . . and we’re sitting at an out island in the Exumas with not much around us . . . no marine stores . . . nor marinas . . . no mechanics. Yikes. STUCK!

Really good: He discovered it while we were sitting still. If that thing goes while you’re underway, your engine overheats and comes to a dead stop which could happen at a most inopportune moment, and that could be really, really, really ugly.

Bad: Of all the spare parts we have on board, a raw water pump isn’t one.

We started weighing all of our options including the possibility of heading to Nassau strictly under sail, only turning the engine on at the end to dock . . . which we ended up not needing to do, but we considered it.

Good: One of the B to B Fleet knew that others had had boat parts flown in to Staniel Cay Yacht Club (7 miles away) from Ft. Lauderdale. YES! Thank you for that key information, Brian and Jane!!!!! So,

EXCEPTIONALLY GOOD: We found a marine store in Ft. Lauderdale who had the pump we needed. Then, (after charging us an arm and a leg) drove the part to the hangar where Watermakers Air flies from. It was on the next flight in the morning straight to Staniel Cay Yacht Club . . . and the Yacht Club has a boat that goes to Black Point every evening, and our part was on that boat. We discovered the problem at 10am on Friday morning and had a part in our hands at the dock at 5:30 on Saturday afternoon in the middle of the Exumas. I can’t tell you how amazing and unbelievable that is. The flying/shipping part of the whole deal was only $65 which we thought was incredibly reasonable under the circumstances!

Frank had to improvise something to use as a vise.

Really good: Frank successfully installed the water pump on Sunday after many hours of grunting, bleeding, bruising and frustrations. We fired up the engine and were filled with glee when we saw the water pumping out of the engine!!!!

REALLY, REALY UGLY: Not sixty seconds later did we discover that the alternator was no longer working . . . a very unhappy moment on Eleanor Q. The alternator was removed to put the water pump on and should have just slid back on, plugged back in and functioned . . . but it did not function. It was a crushing blow.

Good: The engine can still run without the alternator, but –

Bad: Because you lose some important functions like charging your batteries while you’re underway (important, as they run your navigation station tools like GPS, radar, depth finder, etc.) We have backups . . . solar panels help charge, and we have a generator permanently installed. There are ways to work around it for a while, but an alternator is an important piece of equipment that you don’t want to lose. Basically, we ran the generator while we were underway. The generator is located in a cabinet in the middle of the cockpit, so running both the main engine and generator at the same time basically renders you deaf by the end of two hours.

Bad: Nothing worked. We needed professional help. So, we set off for an unexpected trip back to Nassau. In addition, Frank had been fighting a tooth ache. We decided it was time to go to the “big city” to get some of our issues resolved once and for all.

Good: We stopped back at the Land and Sea Park at Warderick Wells for the night on the way and met up with our friends Anna and Corky on Kabria. They made us a delightful dinner and gave us respite for the night . . . and a ride back and forth between our boats! They were heading south, we were heading north, and this was our point of intersection. We had met them this summer in Newport and have stayed in touch ever since. 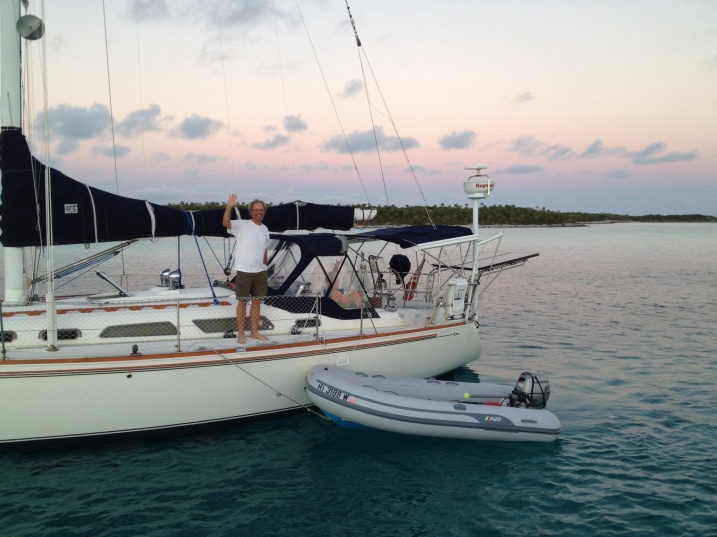 Corky and Anna on Kabria waving goodbye as we leave Warderick Wells before sunrise.

Leaving Warderick at dawn – park office in the light.

Good: We left at dawn the next morning and had a beautiful motor sail for nine hours, ending up in a slip in Nassau Harbor Club Marina. We quickly set to work lining up a mechanic and a dentist.

Good: The dentist took Frank the next day. A filling had fallen out and they were able to replace it on the spot.

Really good: We decided to stop fighting with the dinghy engine since the parts we needed to fix it were not readily available . . . we packed the engine away and will refurb it back in the states and SELL IT!!! Meanwhile, we purchased a new dinghy engine in Nassau . . . six more horse power and eight less pounds, to boot! We couldn’t let the dinghy be the root of ruining the rest of our winter. You have to have a reliable dinghy.

Great: Frank figured out the problem with the alternator BEFORE a mechanic came! It was a large fuse right on the battery bank. He had checked other little fuses, but not this one since he thought that if a large fuse had blown it would have sparked, popped, arced or something. No sign. It was Mike Gozzard that thought of it. And, THAT was a spare part we had on board. Popped that puppy right in, fired up the engine and we had a working alternator again! Great day in the morning!

Particularly good: Coming to Nassau meant I got to see my friends, the Rolle family, again! We had a really lovely lunch with them at the Poop Deck . . . Mr. and Mrs. Rolle and daughter Sharrie came down. That made me happy.

Lunch With the Rolles

So the little boat, the big boat and the captain are all fully functional again and we’ve set off for the Abacos. We left Nassau Harbor yesterday morning and arrived in the little harbor at Royal Island on the tip of Eleuthra about seven hours later. The morning started out with an exciting ride through the cut from the shallower harbor water to the ocean . . . let’s just say I had never seen the bow IN the waves before, but that part only lasted for about ten minutes and then things got progressively calmer as the wind died out throughout the day.We will make our way into the Abacos and arrive in Hope Town in the next few days where we hope to resume some more vacation mode and move the score up the Outward Bound-Jimmy Buffet Scale closer back to an 8 or 9 and away from the 2 – 4 range that has been for the last nine days. It’s just part of cruising. Every boat we talk to shares similar stories. It is part of what comes with it. Your home floats and is exposed to the elements and takes a beating and requires ongoing maintenance. All part of our first year learnings!

Onward and upward to The Abacos!
Our hope for Hope Town: More Good, Less Bad, No Ugly.

P.S. Since the previous portion was written, we have arrived in Hope Town and are loving it. We have gotten the Red Carpet welcome from some cruising friends who have been here since December. More on that in the next post.