Zooming Through the Northern Exumas

We left the Exuma Land and Sea Park for places further south. Next stops: Staniel Cay, Black Point Settlement and Little Farmers Cay. Staniel Cay is particularly famous for wild swimming pigs. Yes, you read that right: wild, swimming pigs. We were anchored around the corner from the harbor at Big Major Spot. Yes, you read that right, Big Major Spot. Funny name. Our stay there was brief but enjoyable. We took the dinghy in to visit Staniel Cay “proper.” After being at the park for nearly a week with nothing around but nature (which we loved) it was actually nice to go to a place with a little restaurant on the water where we could get a sandwich and a couple of Kaliks. However, to get from the dinghy to the dock, we had to climb a ladder over a ray and a large shark. Yes, you read that right. It was a nurse shark, which everyone tells me is the friendly kind . . . uh huh . . . but he/she was quite large and proceeded to park itself right under the dinghy which made climbing the fives step ladder to get on and off the dock just a little more exciting. Apparently, people feed the sharks and the rays at the marina and they are quite tame – at least that’s what I kept telling myself. We walked around town, took advantage of a couple of small grocery stores, talked with some lovely ladies who ran each of the shops, and enjoyed stretching our legs. As we discussed which day of the week the mail boat comes in (a BIG day for each location since it brings in all shipments and supplies including the fresh produce for restaurants and grocery stores and is the lifeline for any business) the one woman laughed and said, “They don’t call us ‘out islands’ for nothing!” The islands are pretty small and sparse, but very friendly. On the way back from town, we cruised by the beach where the wild pigs hang out. Apparently many of them were napping, but two little pigs did come out to the water line. Only one was motivated enough to swim out to see what we had for her. We had taken the end of Frank’s lunch with us. Miss Piggy was very interested in the lettuce but totally turned her nose up at the leftover french fries. I figure either she was trying not to make a pig of herself or the potatoes were fried in bacon fat. She was very cute and friendly and we enjoyed her visit. I had seen pictures and heard about the pigs being big and aggressive. A couple of days later friends told us of witnessing a small boat going up to the beach in the very, very shallow water and having several pigs trying to launch themselves onto the boat! I enjoyed our mellower interaction with our little speckled friend.

Feeding the Pig in Staniel Cay

The next day we moved on to Black Point Settlement. We caught it on the day of their community BBQ. They had huge grills fired up making steaks, ribs, chicken and fish. We had a delicious meal there, caught some of the local flavor and then walked around more of the pretty little island. 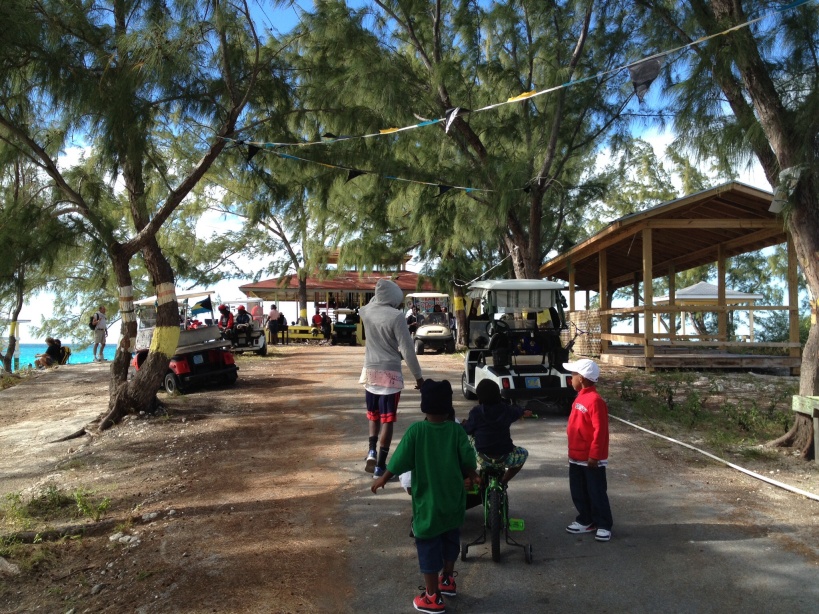 Finally! Ice cream! It is hard to come by in these parts. Anthony and Frank partake happily.

This gives you an idea of the size of the settlement; here’s the government office!

Annette and Ems in Black Point

Here’s an interesting display of driftwood in someone’s front yard.

A cottage on Black Point. Love this evergreen!

Although it might have been nice to stay in Black Point for another day, we kept our visit short because of an approaching front that was predicted to have some pretty snarly west winds. The wind direction is very, very important for where to anchor the boat. Picking the wrong spot can mean a) worrying about the anchor all night because it is rough, and b) getting a bad night’s sleep due to the boat rocking and rolling all night. So off we went to find better protection at Little Farmers Cay. The anchorage and mooring field are situated between a couple of land masses, so it is a fairly settled anchorage. There is a big festival in February here, so we were there at a quiet time – which was kind of cool. It felt like we had a private island! And at this point we were back to our fleet of three traveling together. Our first night we rode in to the little harbor and enjoyed dinner at Ocean Cabin. Terry, the proprietor, was an interesting character and his wife was the evening’s chef. We ended up being the only people in the place for dinner! We enjoyed great conversations and Terry joined us for a memorable after dinner chat. The next day we went back in to the second of two places to get a meal on the island: Farmers Cay Yacht Club. Roosevelt was the owner and our host for the day, and again, we were the only people there! It was a leisurely, mid afternoon meal and we enjoyed walking the docks and enjoying the warmth of the sunshine as our made to order dinners were prepared with love. Roosevelt brought our conch fritters out to the dock for us to munch on while we waited for dinner. The wait was well worth it! Roosevelt was a gracious and delightful host. And we enjoyed the view of our boats in the harbor. Little Farmers has the Five F Festival (Farmer’s First Friday in February Festival) at which time 100 – 200 boats could be anchored up there. It was hard to picture after our peaceful, low key, private tour of the area. I think I might like visiting it when it’s quiet better! 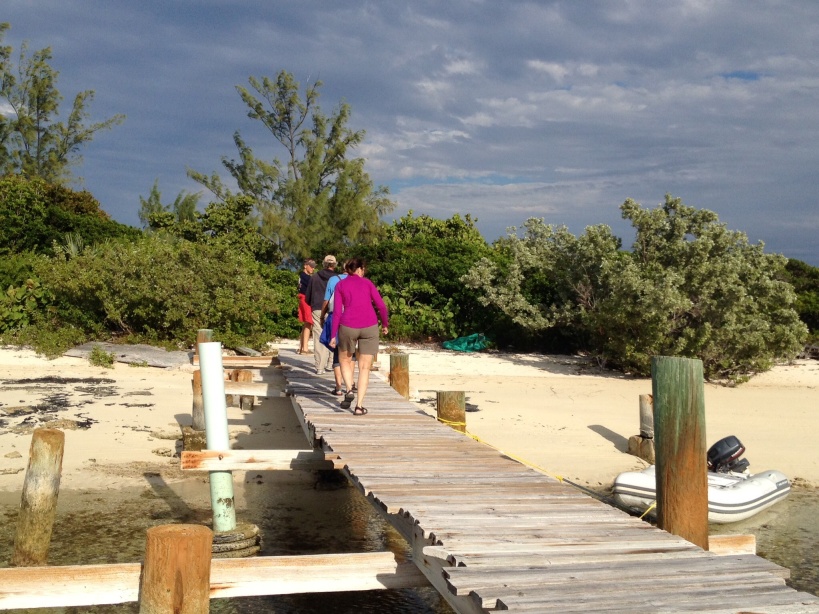 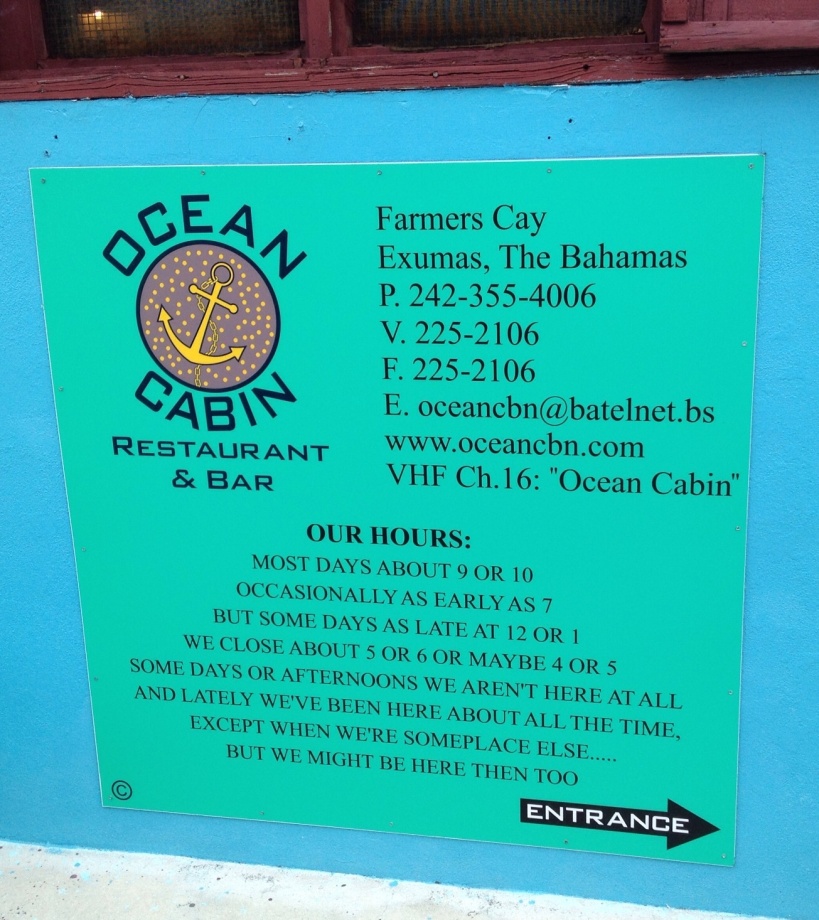 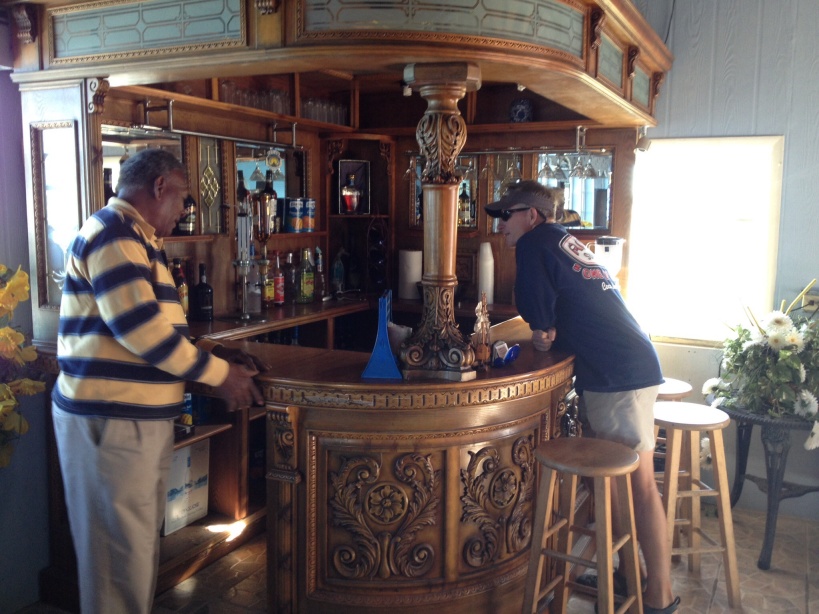 frank and Roosevelt at the yacht Club 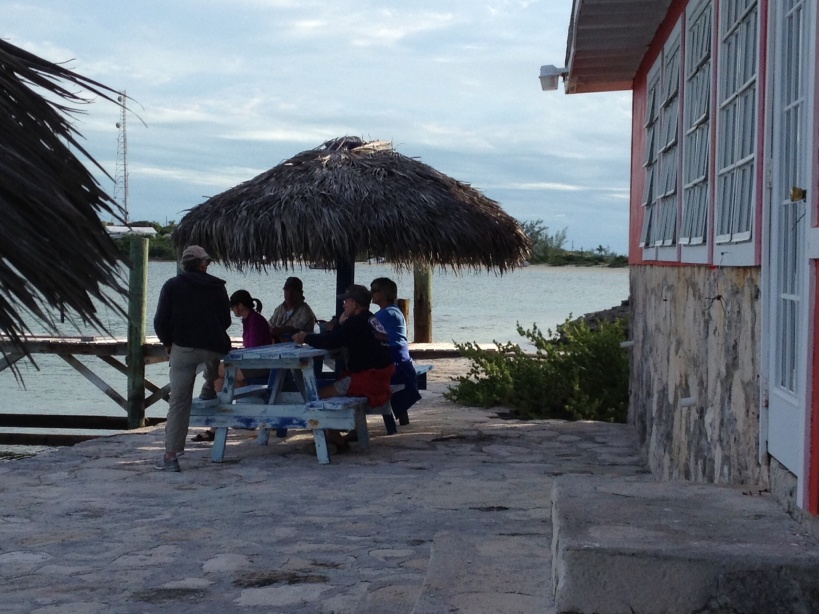 Tiki Hut at the Yacht Club 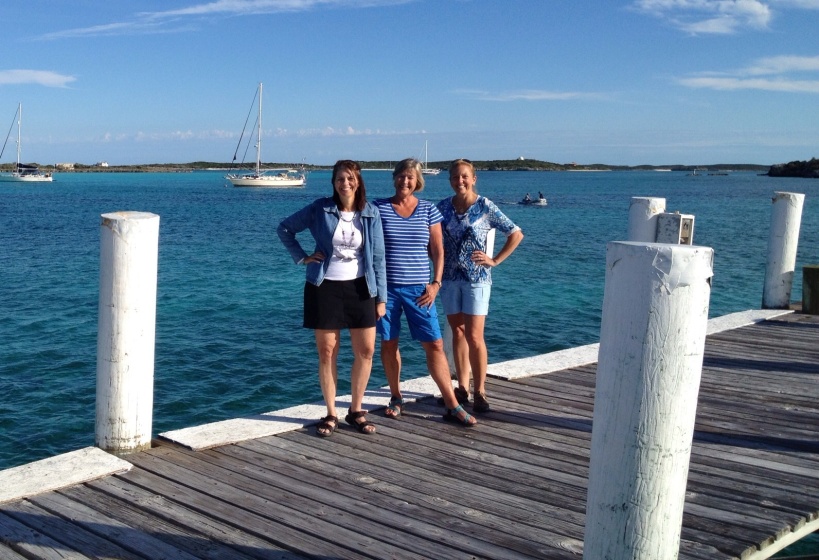 The ladies on the dock with our boats in the background: Annette, Nancy and Ems

Kind of looks like a Kalik commercial, doesn’t it? Anthony posed this picture with Eleanor Q in the background. Very artistic. 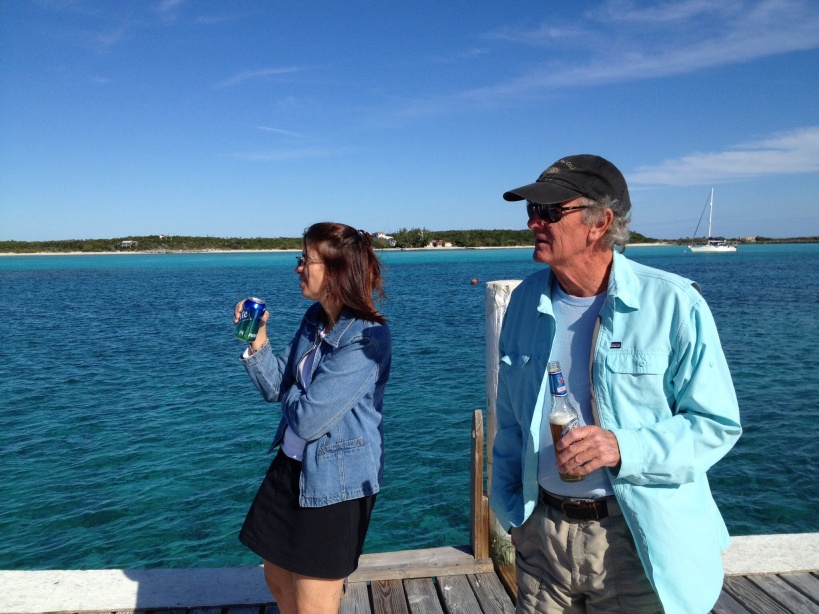 Ron and Annette enjoying the view and the sunshine. See, we had long sleeves on. We had a little chill. We needed the sun! Nope, not getting any sympathy, are we?

Don’t Nancy and Frank look like siblings in this picture?

Watching a seaplane overhead while at anchor

After our two days there, it was time to get on down the road to George Town, our planned southernmost point in our travels and a place we had heard and read so much about . . . the key word in that sentence being “planned”. You read that right. Stay tuned to see if that’s where our southernmost point turned out to be or not!