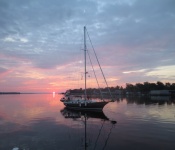 Elizabeth City is a popular cruisers’ stop along the ICW. They call themselves the Harbor of Hospitality – and they are, particularly Monday through Friday. We arrived on a Saturday. The Visitor Center is not open weekends and the late afternoon cruisers reception that we had heard so much about doesn’t take place on weekends, either. Our little pack of floating wanderers (many of us who met at the Dismal Swamp Visitors Center) decided to have our own welcome reception, borrowing the city’s tent. It was another lovely evening of socializing. On Sunday I (Ems) wandered up to the Methodist church . (You know, if I had just let you finish reading that particular sentence, there wouldn’t have been any need for me to specify which one of us walked to church, I suspect.) I was welcomed warmly before I even got in the front door. A lovely couple, Al and Dianna, adopted me for the morning. Turns out they have a son who lives on his boat in Charleston (SC) who has sailed to the Bahamas a number of times. The service and the music were very nice (a church that still has a pipe organ – hooray!) Al and Dianna offered to play tour guides around town that afternoon, telling me about an Arts and Crafts show at the local school. I declined the tour, but did take them up on the ride back to the docks where they came and met Frank and some of the other gang. 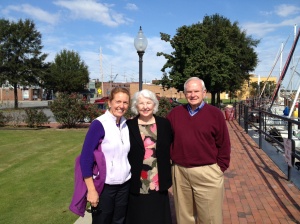 Al and Dianna escorting me back from church and visiting the docks..

Three of us couples walked to the art  show and enjoyed a well prepared comfort meal in the cafeteria. Then we proceeded to stroll around the city admiring the historic houses.  As we were walking back, Frank’s radar went off. His ears perked up and his nose started twitching like a blood hound. “What is it???” we all wondered. His instinct told him there was ice cream close by. Sure enough . . . just a little further up the road we spotted the Dairy Queen he had been detecting. How does he know? 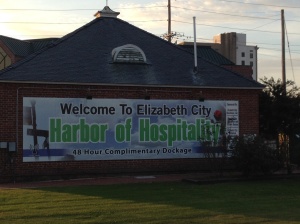 And then we had a wonderful thing happen; our friends Annette and Anthony from S/V Magnolia came to town! (For those wondering, S/V = sailing vessel and M/V = motor vessel) They parked in the slip next to us on Sunday evening.

Hanging out with Annette and Anthony. We did not try to coordinate our outfits, I swear.

We decided to stay an extra day to visit with them – dinner on our boat Sunday and on theirs Monday. The extra day meant that we got to experience the legendary Elizabeth City “Rose Buddies” wine and cheese reception on Monday evening. Here’s how the story goes: On a summer evening back in 1983, Fred Fearing and Joe Kramer, two local residents, decided it would be a cool idea to walk down to the docks and greet the incoming mariners. Fred brought the refreshments and Joe cut roses from his garden to give to the ladies. The ritual continued and became legendary up and down the waterway. When the gentlemen passed away, volunteers took up the tradition and eventually the rose bushes from Joe’s garden were transplanted to the flower beds by the docks. This story reminds me of how the small acts of kindness by a person can have an impact on so many others. (I know that was very sappy sounding, but seriously!) The Visitor’s Bureau coordinates the reception and volunteers cut the roses and set up the wine and cheese.  A former mayor (who became a cruiser himself) was able to give not only great information about the city, but also about the surrounding waters and the trip south. He was most entertaining and informative! 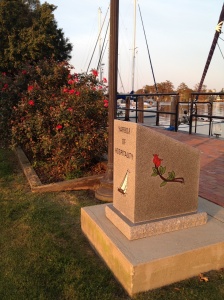 Here is a monument telling the story of the “Rose Buddies” beside the transplanted bed of roses.

We enjoyed our stay, but it was time to head somewhere new. Annette and Anthony had just come from the town of Edenton, NC – not a usual stop on the way south as it is about 40 miles out of the way west on the Albemarle Sound. They had such a great visit there that we decided to take their advice and add it to the agenda. And so we left at sunrise for a full day trip to Edenton. 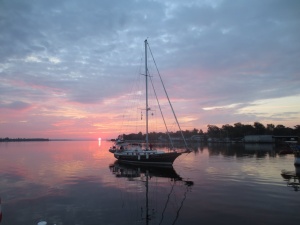 We arrived in Edenton  during “Cruiser’s Rally Week” during which they were offering free docking for the entire week and $5/day for electric. Can’t beat that offer! It is a small harbor with only about a dozen or so slips and a large break water surrounding that boats can also tie up to. It’s a shame that only a handful of people took advantage of the deal while we were there. Much of the time the marina was nearly empty.

Forbes recently voted Edenton one of America’s 11 prettiest cities, and we could see why. Downtown was thriving as compared to many other small downtown areas that have been decimated by big box shopping centers going up on the outskirts of town. The harbor is right in town, so everything was easily accessible. There was a “courtesy pickup truck” that we used to go to the grocery store, laundromat etc. and took advantage of the time to also top off our propane tank. The little things that make life simpler, ’cause I’ll tell you, that propane tank is heavy!

Sunset our first night in Edenton.

Frank looking out over the water. 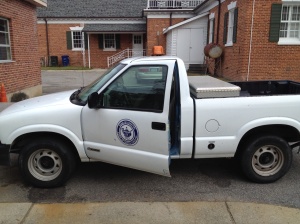 Here was our ride for the day . . . the county pickup!

We spent Halloween in Edenton. Fun things that made it apparent that it was Halloween: 1) “Silence of the Lambs” was playing on the TV in the laundromat. 2) They had “safe trick or treating” in the downtown district with local business, police and EMTs handing out the candy. (The police officers couldn’t be in costume, but one female officer had a stuffed black cat attached to her shoulder.) After having dinner in a local restaurant with a perfect view of the Halloween festivities, we walked to the classic, local movie theater to see Capt. Phillips.  If you don’t know, that’s the true story about the tanker ship captain who was abducted by Somali pirates and then rescued by the Navy Seals. Tom Hanks is great in it, but somehow it felt a little odd to get to the end of the movie and say, “Okay, let’s go back to the boat now.” No pirates in North Carolina.

Halloween in Edenton! Even the dogs were in costume!

Laundry day in “The Wash House” with Anthony Hopkins on the screen. I offered to make Frank some fava beans for lunch but he declined. (Who knows the movie line???)

The next day we enjoyed exploring town even more. There are many historic structures in the town. One story is about the Edenton Tea Party at the Barker House. Seems that the famous Boston Tea Party sparked outrage in Edenton, and the women’s group that met regularly for tea took a stand and decided to boycott tea in support of Boston’s act of defiance. Britain was used to people protesting, but in the 1700s it was MOST unusual for a women’s group to take a political stand of this sort and word got back to Britain and created quite a stir. 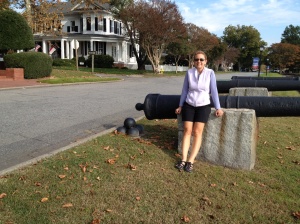 Didn’t anyone ever teach this man not to stick his head in front of a canon? 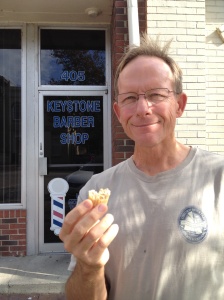 Frank is headed to the barber shop – right after he finished his ice cream cone! 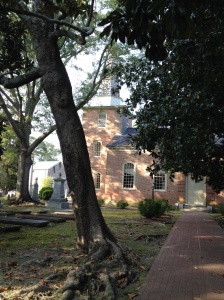 The second oldest church in North Carolina – built in the mid 1700s. 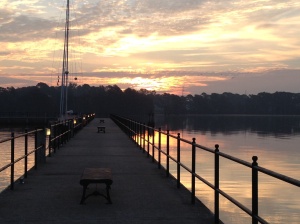 One of our favorite things about Edenton was meeting our new friends Gil and Barbara. They are Edenton locals, sailors and graduates of cruising to the Bahamas. While we were sitting in the harbor, Gil sailed by on his Sunfish. We struck up a conversation as he lithely maneuvered the little sailboat back and forth by Eleanor Q while chatting. By the end of the discussion he had invited us to his home for fresh oysters roasted over an open fire. (‘Tis almost the season – I am definitely changing the word “chestnuts” to “oysters” this year. Luckily that night, Jack Frost was not nipping at our noses.)

Gil on his Sunfish

We met him on Wednesday and the invitation was for Friday. On Friday I decided to attempt to make an apple pie to take with us and Frank worked on some boat projects.

Apple pie decorated with a crust apple . . . with a worm coming out of it. Blame it on my sister Triana. i stole the idea from her!!

Can you ever have too many wrenches?

So on Friday night, Gil picked us up and took us to meet his wife, Barbara, and to visit at their home. Their 31 foot sailboat, Barbara Jean, is in a slip right behind their house. Gil designed and built the boat himself and the two of them sailed it to the Bahamas. Not a detail was overlooked on that boat! After our tour, we sat at a table in front of a fireplace in their home and ate oyster after oyster after oyster! They have a metal grate on a swivel in the fireplace. It just swings right out, oysters go on the grate, it swings back in over the fire and voila! You have wood roasted oysters! Gil just kept bringing pan-fulls of them to the table and we kept on gobbling them up! We seriously went through a half a bucket of them. There was still a half bucket left, but we cried uncle! They shared their cruising stories and experiences with us and we learned more about each other. It was a delightful evening. Again, individuals showing simple acts of kindness to other people = big deal! That evening is what we’ll probably take away from Edenton more than anything else. And we hope to meet up with them again on our way back through.

Gil standing in the companionway of Barbara Jean.

It was time to move on from Edenton – we stayed there for four nights which is pretty much a record for how long we’ll sit still in one place. And so we trekked back across the Albemarle Sound and continued our trip down the ICW. We are finding North Carolina to be a very hospitable place indeed.

Read more from General Posts About Travels
Edenton
← Over the Bay and Through the Canal to Albemarle Sound We Go!
North Carolina: The Second Half →
5 Comments Post a comment