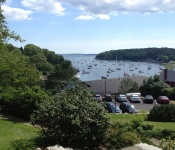 We try to have very few dates/destinations that we must be at because it puts pressure on our choices . . . and weather is always playing a big part in our decisions. But we did plan to attend a Seven Seas Cruising Association gathering or “gam” on August 2-3 in Islesboro, so we didn’t want to waste any time getting up that way with a day cushion in case weather delayed us along the way. So we made several quick hops and got ourselves up to Islesboro and Gilkey Harbor in plenty of time.

Our stops along the way were PORT CLYDE, ROCKLAND and ROCKPORT.

Port Clyde, Maine: You know pretty quickly when you pull into a harbor whether you feel comfortable there or not . . .  sort of like when you walk into a hotel room. That first minute or two and you’re pretty clear if you can relax. Port Clyde was like a good hotel room . . . pretty, comfortable and peaceful.  We took the dinghy in to the hub of all things happening in Port Clyde: the Port Clyde General Store. Restaurant on the back, market and breakfast counter on the front. Out back by the water was a lobster shack where some of the local guys offload their catch. We were able to procure six fine specimen for our enjoyment later. 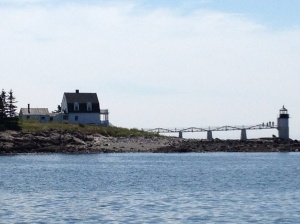 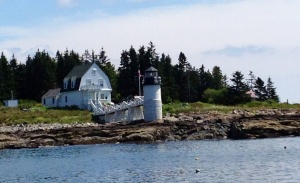 A close up of Marshall Point Light 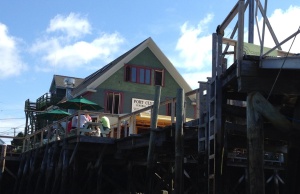 The hub of Port Clyde . . . the Port Clyde General Store. We lunched and provisioned a bit there. The next morning when we came in to town they had fire pits lit out back. It’s summer, right? 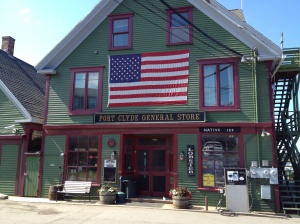 And the store front of the General Store. Very quaint place! And decent provisioning.

And here’s what lovely Port Clyde looked like when we arrived .

And here’s what it looked like the next morning. It was there when we went to bed, I swear!

A common sight in these parts . . . lobster boats! 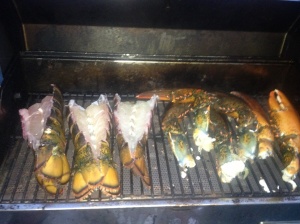 And again, doing our part to help the economy. These became lobster rolls and lobster fra diavlo. 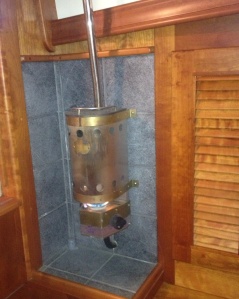 Couldn’t take it any more and fired up the stove – a very nice feature! Finally felt dry and warm for a while. 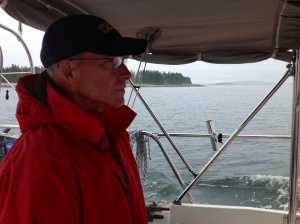 And we’re bundled up and underway to our next stop after a 24 hour visit to Port Clyde.

Rockland is more of a city than many of our stops. Cruisers tend to like it because of accessibility to a major shopping center by foot for groceries, office supplies, etc., so it is a great place for provisioning. We made a productive stop in the RiteAid and then checked out the town. Frank was in search of a hardware store (shock) that had been mentioned in some of our guidebooks. Long story short, when he got to the address later that afternoon, he found a boarded up True Value. Argh! But not to despair – there was a Home Depot close by. The man has every tool (and two of some) on board with spare parts to nearly every major piece of equipment on the boat . . . and yet, there’s always something that comes up in a repair that  we don’t have. Murphy’s Law, I suppose. I would say “Quigley’s Law” but I suspect he doesn’t have a corner on that particular situation. (Can I hear an “Amen?”) When we went into town, they were setting up a carnival for the start of the Rockland Lobster Festival. We did not help them test the portable ferris wheel. (Those of you in Grantville will understand that more than most.) 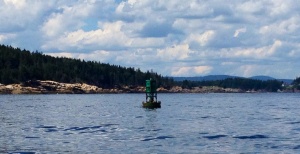 Owl’s Head Light near Rockland . . . on approach to town. 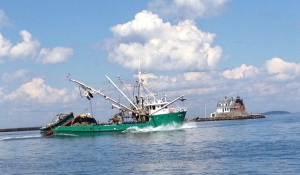 A beautiful seiner (type of fishing vessel) going by Rockland Harbor Breakwater Light as we’re coming in to port. 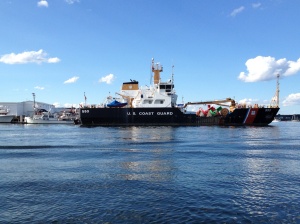 The Coast Guard Station at Rockland. There are many ferries, workboats and lobster boats going in and out of the harbor non-stop. I have heard other cruisers refer to this as “Rocky-Land” based on the comfort level of the harbor! You do tend to rock and roll there a bit from all the wake. 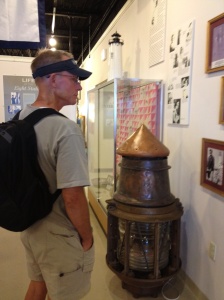 We strolled around the Maine Lighthouse museum. Very nice. 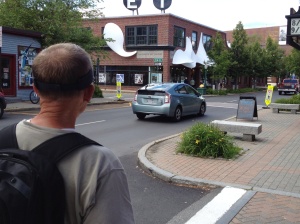 Across the street is the Farnsworth Museum. Among other things, they have a fine display of Wyeth paintings. I don’t know a lot about art, but I do love Wyeth works . . . they do many pieces based on Pennsylvania countrysides (one of their homes) and many others focused on Maine landscapes. We did not go in that day . . . another time.

After one night, which we felt was plenty, we left – in GREAT weather – for Rockport. 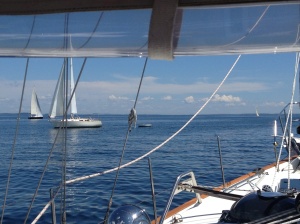 En route to Rockport on a warm, clear day.

Indian Island Lighthouse was taken out of commission in the ’30s and is now a private residence. How cool would that be?

Rockport was lovely, wonderful, special. We LOVED Rockport. Like Port Clyde, we kind of knew when came into the harbor were going to like it here! It was a short trip from Rockland, so we had a good afternoon and evening to spend walking around town. And walk around town we did! We get a lot of exercise just hoofing it everywhere . . . and Rockport is HILLY! That made us feel justified when we got to dinner later, but I’ll get to that in a minute. Rockport is also somewhat of an artist colony and houses a fine music hall and chamber music program. There were no concerts the night we were there. Many lessons learned on this trip about timing . . .

We hadn’t had lunch and figured we’d find something to eat in our trek around town, but it was about 3pm. We had just missed lunch at some places and were too early for dinner at others. So we walked a far piece to where we thought there was a restaurant . . . turned out to be a roadside BBQ stand, and it wasn’t talking to us. Okay . . . hungry but happy, we kept walking. There was a market in town that we had read about . . . you know, the “let’s pick up a little food at a time so we don’t have to carry too much” theory. He’s hardware stores . . . I’m markets. We FINALLY got to this market (after walking another far piece) . . . and it had nothing we needed, pretty much. So walked back down to the harbor mostly empty-handed and wtih empty bellies.  So even though we were getting tired and probably getting a little ripe at this point, we were standing outside of a very nice looking restaurant that was due to open shortly. We decided to treat ourselves . . . we were WAY too lazy to go back to the boat, shower, and then come back out for dinner. So we sat in the park and watched people swimming in the 64 degree water while we waited for 5:00pm. (It was 5:00 somewhere, but not in Rockport yet!) The place was called Shepherd’s Pie, and it was amazing. Great looking place right on the water with lots of dark wood like an irish pub, put with floor to ceiling windows looking out over the harbor. The kitchen was open to the dining room with a wood burning stove. We ordered a treasure trove of appetizers and turned it into a meal. EVERYTHING we ordered was outstanding! (And it wasn’t just because we were that hungry.) Beyond outstanding. Makes you want to do a happy dance kind of good. Neither one of us has had a meal that we drooled over that much in quite a while! I don’t know what came over me, but as we were walking out, I walked to the open kitchen and called out, “Are you the head chef?” The chef looked at me like, “Oh no, here it comes.” He forced a smile, walked over and said,”Yes.”.  I put my hand on Frank’s shoulder, looked at the chef and said, “I know I’m too old for you, but I’d leave my husband for you – that’s how good that meal was.” Then I turned around and walked away before he could figure out how to respond. Happily, I heard two laughs from behind me and, luckily, one of them was Frank’s.

Here are some shots from our day. 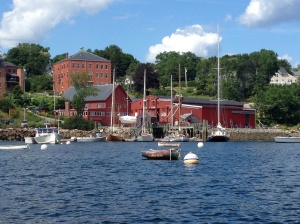 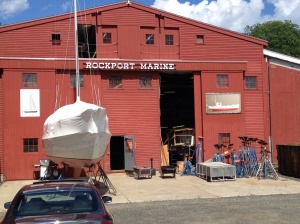 Rockport Marine – we tried to get a mooring ball from them! 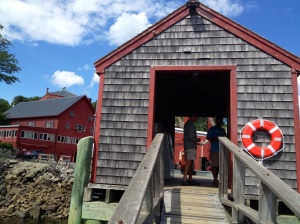 Frank attempting to pay for a mooring ball

Earlier when we got in to harbor, we picked up a mooring ball that we thought belonged to the marina. It seemed to fit the description. Frank at the helm, I went to grab it on the bow. The rope felt kind fo slimy when I was pulling it up, which was very odd. I got hold of it and was just putting the loop on the cleat to secure it when I realized that the “slime” was moving! It was thousands of little tiny crabs and mussels and other living things. I try to “put my tomboy on,” but I am not a fan of crawling things – I admit it. Fortunately, I already had the line hooked on the boat when I realized this, therefore preventing me from dropping it in the water! I hope the yelp I let out was a little, private one. Frank came up to assist and survey the situation. Now we had little crabs trying to crawl onto the deck. Nothing that the wash down hose couldn’t fix, but more importantly, that told us the mooring ball hadn’t been used in a very long time, which struck us as odd. Come to find out, we had mistakenly pulled up to a privately owned mooring, which the nice young man at the marina informed us when we told him what number we were on. He didn’t care. He said, “You can stay on it – just be prepared to move if the owners show up.” Judging by the ecosystem on the ropes, we figured we didn’t have to worry about that! And so we saved $35 on our mooring ball that night. 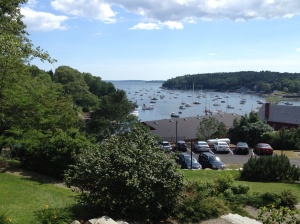 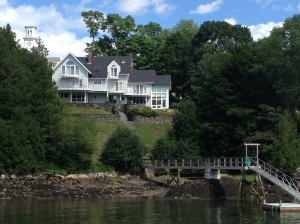 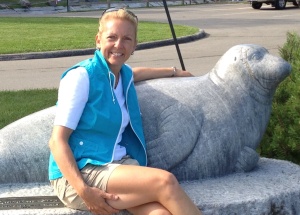 A Statue of Andre the Seal. A 9 year old girl adopted an orphaned seal and named him Andre. The story became a book which became a movie in 1994 . . . and here Ems is having her picture taken with a movie star. 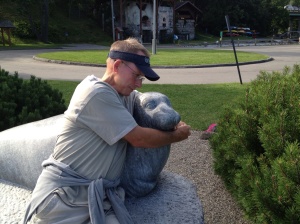 Frank felt compelled to put Andre in a head lock. I suspect he gave him a nuggie and called him a knucklehead, too. 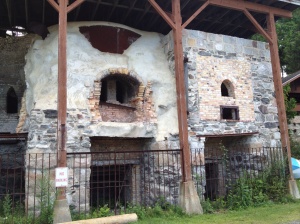 These are old lime kilns, one of the big industries in Maine in the past. 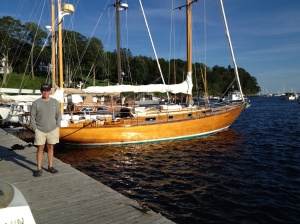 There are some stunning boats in these parts! Frank admiring one example. That’s a serious varnish job there. 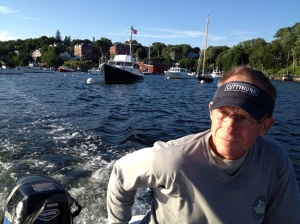 And we’re back to the boat after a full afternoon of walking, sitting in the park and eating! 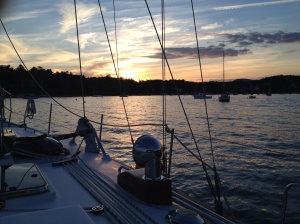 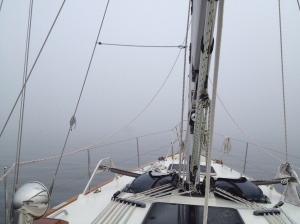 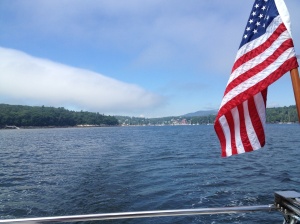 So the fog clears, but looms close by. We got excited and made a run for it in sunshine . . . 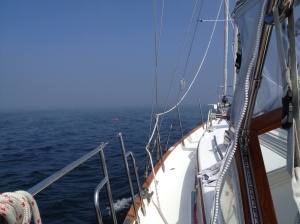 . . . and 15 minutes after we’re under way, we’re back in the fog. Radar is a beautiful piece of technology! On our way to Islesboro. As they say . . . if you don’t like the weather in Maine, just wait 5 minutes.

Next post, our adventures in Gilkey Harbor at Islesboro . . . and the day we almost had to leave our anchor behind.

Read more from Uncategorized
← Boothbay Harbor: Lobsters and the Pots They Come In
Anchors Aweigh . . . or Not: Midcoast Maine →
4 Comments Post a comment